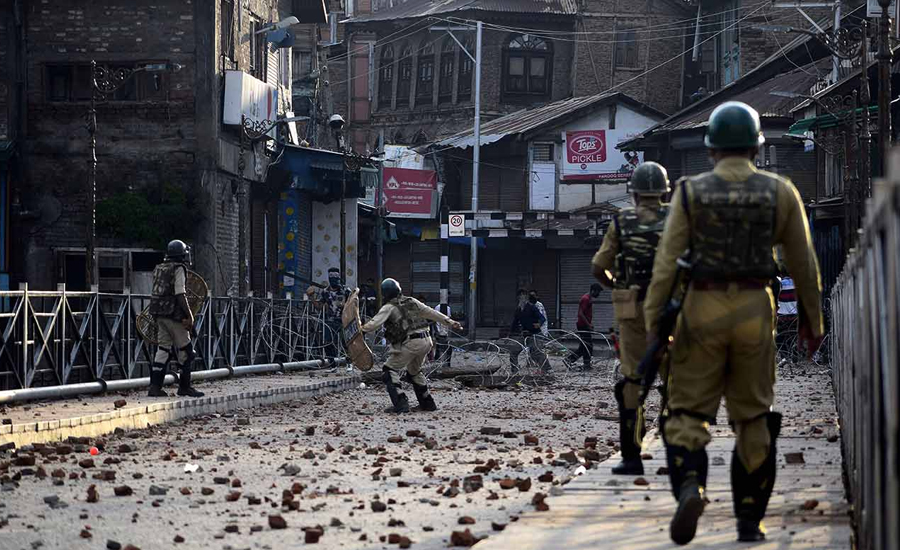 SRINAGAR (92 News) – Curfew and lockdown continued at 45th consecutive day on Wednesday (today) in Indian Occupied Kashmir (IoK) from August 5 when Narendra Modi government announced scraping of the special status of Jammu and Kashmir. The occupied territory continued to reel under strict military siege and curfew on the 45th consecutive day as all markets are closed while transport is off the road. The authorities relaxed restrictions to a limited extent in some areas and opened schools but the students failed to turn up as parents were unwilling to send their children to schools in view of their safety. The attendance in government offices in these areas also remained thin. The mobile telephone and internet services continued to remain totally suspended. Due to the ongoing military lockdown, the people of the Kashmir valley are facing acute shortage of basic essentials including food, milk and life-saving drugs. Under the prevailing circumstances, the local newspapers find it difficult to hit the stands, while they couldn’t update their online editions. Meanwhile, international media reported that screams of people are often heard from Indian army camps in occupied Kashmir at night, as troops pick up youth from villages and torture them at their camps to make them an example for others. Around two dozen young men in the villages of Shopian shared terrible stories with the media. Sajjad Hyder Khan, a local official in Pinjoora village, told media that he had seen a list of 1,800 people detained by police and troops from Shopian alone. The residents say the troops are committing such inhuman acts with an aim to create a climate of fear in the occupied territory. APHC leader and Muslim Khawateen Markaz Chairperson, Yasmeen Raja in a statement urged the international community to take serious notice of worst human rights situation in occupied Kashmir. Communist Party of India-Marxist leader, Muhammad Yousuf Tarigami in a statement said that the people of Kashmir were dying a slow death. On the other hand, thousands of sit-in protests were held and effigies of Indian Prime Minister Narendra Modi burnt at different places in volatile Indian Punjab after protesters were stopped by the police from conducting a march towards Chandigarh for their scheduled rally in solidarity with the besieged Kashmiris. Scores of activists, including women, from different farmers’ and students’ unions, were arrested by the police. The government’s decision to prevent protesters from reaching Chandigarh backfired with thousands holding sit-in wherever they were stopped in the State.