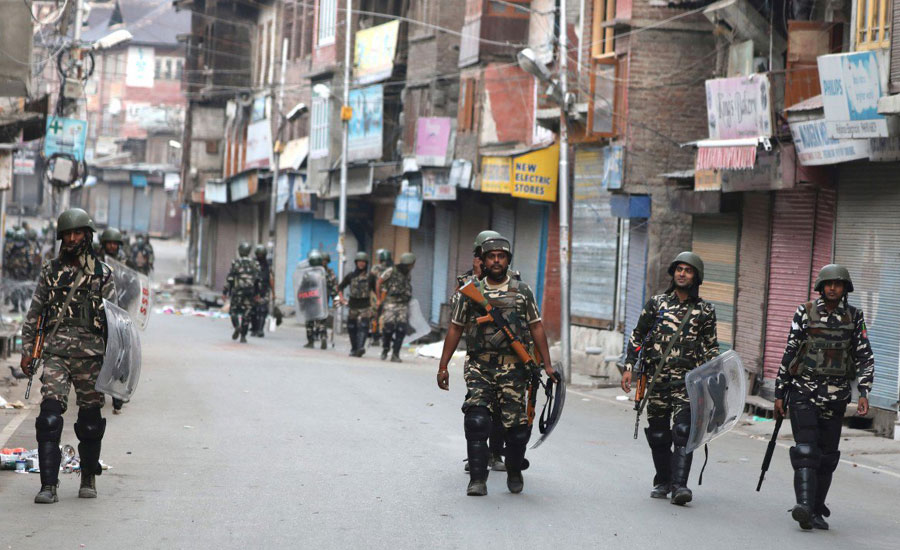 SRINAGAR (92 News) – Curfew and lockdown continued at 52nd consecutive day on Wednesday (today) in Indian Occupied Kashmir (IoK) from August 5 when Narendra Modi government announced scraping of the special status of Jammu and Kashmir. Normal life continues to get hit across the Valley for the 52nd consecutive day as shops and business establishments are closed from Srinagar to as far as Uri town in Baramulla district in Kashmir and Muslim majority area of Doda in Jammu region in IoK. All small and major sectors of life including business and commerce, education, transport, horticulture and tourism are virtually defunct with unprecedented communications blockade adding more to the prevailing uncertainty. Schools, colleges and universities are either closed or remain empty as parents are reluctant to send their children to educational institutions amid military lockdown and communications blackout. As mobile phone and internet services continue to remain suspended, officials say they have no plans to restore them in the near future. The Srinagar-based Kashmir Press Club while criticizing the unprecedented communications shutdown said that these unreasonable restrictions are aimed at gagging the press in the territory. Transport sector has been affected the worst as 50,000 vehicles stand grounded since 5th of August during the curfew. The owners of these vehicles complained that they were not able to ply because of the clampdown across Kashmir valley. They said that they procured loans to buy vehicles with an only aim to earn a living, but all their hopes stood shattered as they had not earned a single penny during these 52 days of curfew. Similarly, the tourism front has also taken a hit due to the clampdown. All hotels are almost empty and taxi service is unavailable too. The tourism players blame directly India for their woes. They said that their hotels and houseboats were running in huge losses. Generally, an environment of fear persists due to heavy military presence in every nook and corner of the valley. Indian forces randomly pick up youth at many places, severely thrash and beat them to create fear psychosis among the general masses. In a series of latest cordon and search operations in different areas of Kishtwar district, Indian forces arrested at least three youth. The operations, conducted jointly by the personnel of Indian Army, police, Central Reserve Police Force and National Investigation Agency, are meant to find pro-freedom voices and silence them. Meanwhile, Indian officials confirmed that as many as 343 politicians, business leaders and young boys, booked under black law, Public Safety Act, have been shifted to jails in Uttar Pradesh and Haryana in India since the revocation of the special status of the territory on 5th August. However, independent sources say that the number of actual detainees imprisoned outside jails under PSA is far more than the one stated by the officials.