CWC19: Team of the Tournament 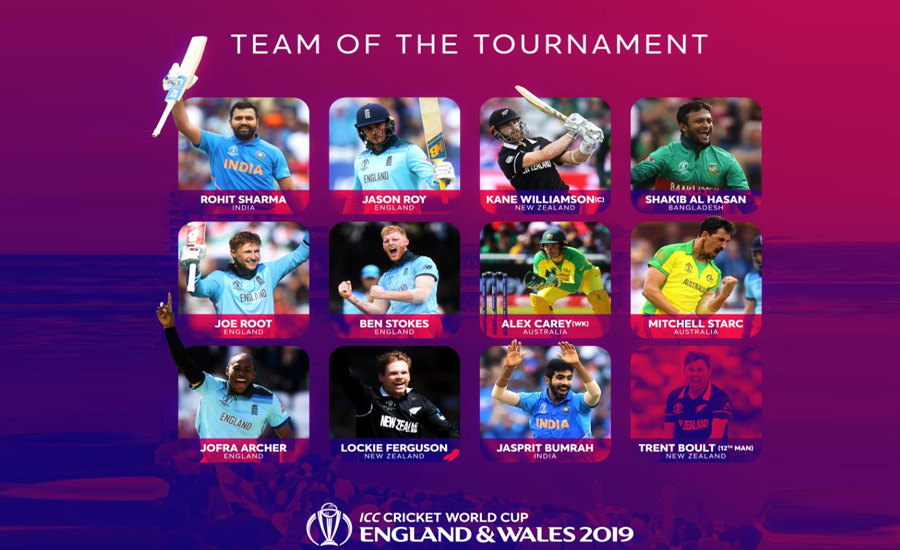 CWC19: Team of the Tournament

LONDON (ICC) - The twelfth edition of the ICC Men's Cricket World Cup had some remarkably consistent performers over seven weeks. Here are eleven of the best, making our star-studded team of the tournament, led by Kane Williamson, the New Zealand skipper.
Rohit Sharma (India) Ranked second in the MRF Tyres ICC ODI Batting Rankings, Rohit Sharma had a record-breaking World Cup, showing why he's one of the most feared batsman in limited-overs cricket. The right-handed opener notched up a match-winning, unbeaten century in India's opening game against South Africa, and followed it with four more three-digit scores, including back to back ones against England, Bangladesh and Sri Lanka. Rohit's five centuries are now the most ever by a batsman in a single World Cup, beating Kumar Sangakkara's tally of four, which he made in successive games in 2015. In the absence of his regular opening partner Shikhar Dhawan, who was ruled out due to thumb injury, Rohit led the Indian batting with 648 runs in nine innings - the highest in the tournament - and threatened to break Sachin Tendulkar's all-time World Cup record of 673 runs, which he achieved in the 2003 edition.

The England opener had a decisive impact on his team's result in a manner unlike anyone else in the tournament. Roy instilled a much-needed sense of energy in his team, after they lost back-to-back games to Sri Lanka and Australia, when Roy was sidelined due to hamstring injury. His impact was felt in England's must-win games, against India and New Zealand in the round-robin, and against Australia in the semi-final, as he stitched together three successive century stands with his opening partner Jonny Bairstow. Having scored 443 runs from seven innings at an impressive strike-rate of 115.36, Roy forms a formidable opening partnership with Rohit Sharma in this XI.

The bedrock of New Zealand's batting right through the tournament, Williamson was an immovable object at the crease and an astute captain, who impressed with his tactical nous. The New Zealand captain completes the formidable top order in this XI, with his solidity and reliability, and also leads the team of the tournament. Williamson scored 578 runs at an impressive average of 82.57 and emerged as the Player of the Tournament. His ability to extract the best from his players and leading from the front makes him the perfect man to lead the World Cup XI.

England's run machine over the years, Joe Root was the glue that held their famed batting together through the tournament. The Yorkshire batsman finished as the fifth highest run-scorer of the tournament, with 556 runs from 11 innings. Root's flawless technique and ability to keep the scoreboard moving by rotating the strike and finding the boundaries as and when required makes him a perfect No.4 in this line-up.

Bangladesh's torch-bearer in this World Cup, Shakib is an automatic entrant into the best XI. Arguably the most valuable player of the 2019 World Cup, Shakib excelled both with bat and ball as he became the first cricketer to ever achieve the double of 500 runs and 10 wickets in a single edition of the tournament. The top-ranked player in the MRF Tyres ICC All-rounder Rankings excelled as a No.3 batsman for Bangladesh, finishing with 606 runs at a staggering average of 86.57, but occupies the No.5 position in this side, given the quality of the top order.

The England all-rounder set the tournament on fire with his breathtaking catch to dismiss Andile Phehlukwayo in the opener against South Africa, after a match-defining innings of 89 earlier in the day. Known for his grit and fighting spirit, Stokes stood tall during the tough times for England, scoring 82* and 89 after top-order failures against Sri Lanka and Australia. He was at it again in the final, standing between New Zealand and the trophy, and eventually put in a match-defining performance, first in regulation time, and then in the Super Over. Along with his skilful medium-pace bowling, Stokes brings great value to this team, as a second all-rounder, alongside Shakib.

The 2019 World Cup featured some of the finest wicket-keeper batsmen of this era in MS Dhoni and Jos Buttler, not to forget the promising Shai Hope and Mushfiqur Rahim. Yet, it was Alex Carey, playing for the first time in the tournament, who grabbed eyeballs with his consistent performances. With his team down at 92/5 against Trans Tasman rivals New Zealand, Carey backed his instincts, scoring a steady 72-ball 71 - an innings of immense skills and staggering fortitude. He showed his fighting spirit in the semi-final clash against England as well, when he made a 70-ball 46 after being hit by a Jofra Archer bouncer that cut open his jaw early in his innings. Carey finished the tournament with 375 runs from nine innings.

Player of the Tournament in the previous edition, Mitchell Starc brought fierce pace and immaculate discipline to once again be his team's most lethal weapon with the ball. Starc finished with 27 wickets from 10 matches - an all-time World Cup record, surpassing Glenn McGrath's tally of 26 wickets in the 2007 edition. The tall-left arm pacer produced match-defining spells on a consistent basis and proved to be effective in every phase of the game.

The Barbados-born pacer had an instant impact on the hosts' bowling line-up, with his aggressive brand of new-ball bowling. A smooth and rhythmic run-up, natural pace, and immaculate discipline were the most striking characteristics of Archer's bowling. Sharing the new ball with the experienced Chris Woakes and shouldering the responsibility of bowling tough overs at the death, Archer excelled on both fronts, finishing as the joint-third highest wicket-taker, with 20 scalps to his name.

While New Zealand's new-ball combination of Trent Boult and Matt Henry launched salvos, Lockie Ferguson stood apart as their strike bowler. With his raw pace and hard-hitting lengths, Ferguson troubled some of the top batsman in the World Cup, such as Faf du Plessis, David Warner and Steve Smith and finished with 21 wickets - the second highest in the tournament - from nine matches.

Hailed by former New Zealand skipper Brendon McCullum as "the best all-format bowler” in world cricket, Bumrah personified precision, hitting consistent lines and lengths with the efficiency of a metronome. The top-ranked bowler in MRF Tyres ICC ODI Rankings, Bumrah controlled one end, which often resulted in his partners reaping dividends at the other end. Bumrah picked up 18 wickets in the tournament and became the second-fastest Indian bowler to complete 100 wickets in ODIs.

Boult was impressive as ever with his pace and accuracy, especially with the trademark in-swinging yorker. He was responsible for one of two hat-tricks in this year's tournament, snaring it at the hallowed turf at Lord's, against Australia, and took 17 scalps in all to finish second on New Zealand's wicket charts. However, despite his spectacular performances through the tournament, New Zealand's pace spearhead finds himself as the 12th man in this world-beating team.