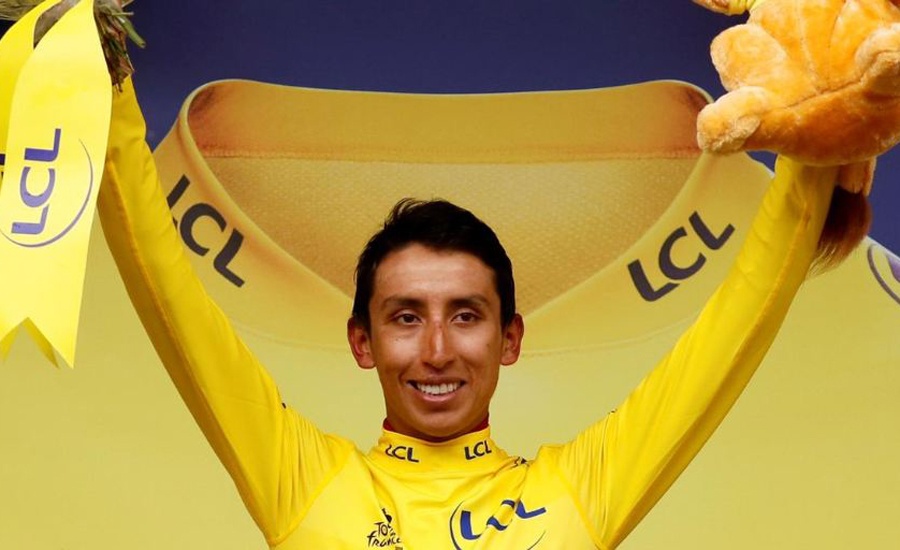 VAL THORENS, France (Reuters) - Climbing phenomenon Egan Bernal was poised to become the first Colombian to win the Tour de France when he retained the overall lead after Saturday’s 20th stage, a 59-km ride from Albertville. The Team Ineos rider, 22, finished fourth in the stage won by 2014 champion Vicenzo Nibali, the only man to interrupt the British outfit’s reign on the Tour since 2012. His team mate and defending champion Geraint Thomas is second overall ahead of Dutchman Steven Kruijswijk after France’s Julian Alaphilippe cracked in the final ascent to the ski resort of Val Thorens. Sunday’s final stage from Rambouillet to Paris is a largely processional ride with only the final sprint being contested. Bernal, who claimed the yellow jersey when he was the first at top of the Col de l’Iseran in Saturday’s truncated 19th stage, was never bothered in a stage that had been shortened due to landslides on the initial course. “We still have to make it to Paris. I can’t understand what’s happening, I will need a few days, it’s incredible,” said Bernal. “I felt good in the climbs, I took it kilometre by kilometre.” Three Colombians will feature in the top 10 as former podium finishers Rigoberto Uran and Nairo Quintana lie seventh and eighth overall, respectively. Alaphilippe cracked with 14km to go in the final 33-km climb ending 2,365 metres above sea level and slipped from second to fifth overall. Bernal is 1:11 ahead of Thomas, who was always bested by the Colombian in the mountains and never looked in a position to threaten him on his favourite terrain.

The Dutchman’s Lotto Jumbo-Visma team set a high pace at the foot of the climb to Val Thorens and Laurens De Plus stepped up a gear to trim the peloton as the breakaway riders’ advantage melted. Sensing the main pack breathing down the neck of the breakaway, Nibali, looking to salvage a poor campaign with a stage win, went solo with 12.5km left. He never looked back and held off world champion Alejandro Valverde, who took second place 10 seconds behind with his Movistar team mate and fellow Spaniard Mikel Landa finishing third. “It was a difficult Tour for me but I never gave up and finally I win again on this race,” said Nibali, who had no huge expectations after finishing the Giro d’Italia second overall this year. Bernal, who will also win the white jersey for the best Under-25 rider in the race, crossed the line 17 seconds off the pace to Thomas’s accolade. In the absence of four-time champion and team mate Chris Froome, Bernal rose to the challenge after winning the Paris-Nice and Tour de Suisse week long races. He will become the youngest rider to win the Tour de France since the end of the Second World War. “Congratulations Egan Bernal. What a rider! The first of many,” Thomas wrote on Twitter. Frenchman Romain Bardet, who dropped out of overall contention early in the race, is set to snatch the polka dot jersey for the mountain classification and Peter Sagan is expected to win a record seventh green jersey for the points classification.