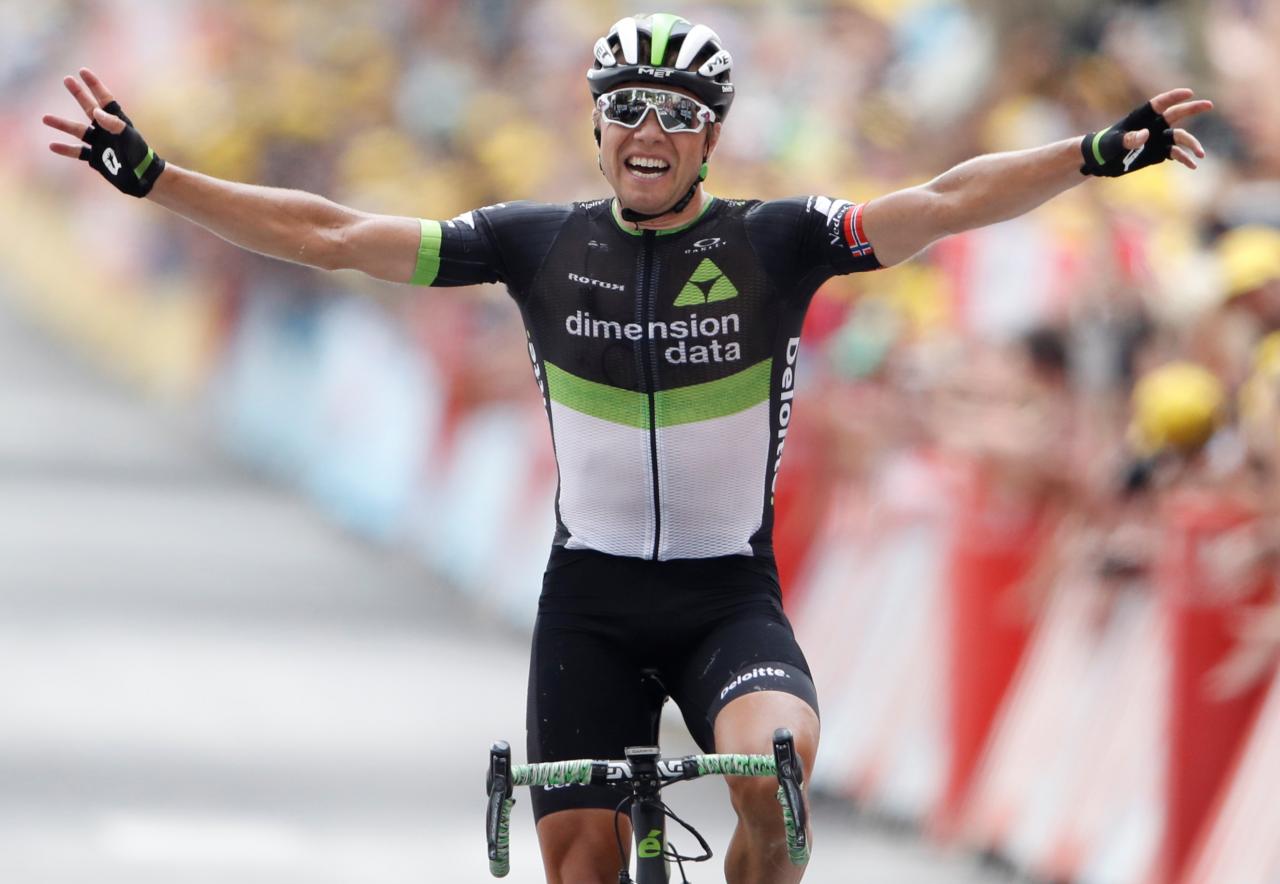 SALON-DE-PROVENCE, France (Reuters) - Edvald Boasson Hagen ended a run of near misses to take stage 19 of the Tour de France on Friday, on a trouble-free day for race leader Chris Froome who moved to the brink of overall victory.

Britain's Froome now looks almost certain to stand on the Paris podium in the yellow jersey for the third year in a row after suffering no mishaps on a hot and sweaty 222km ride out of the Alps into Provence.

The 32-year-old maintained his 23-second lead over Romain Bardet ahead of Saturday's penultimate stage -- a time trial around the streets of the port city of Marseille.

While Froome just wanted a relatively relaxing day in the saddle on what was this year's longest stage featuring three categorised climbs, Norway's Boasson Hagen had a score to settle -- aiming to rid himself of the unwanted 'nearly-man' jersey.

The versatile rider had finished runner-up in two stages and third in two more this year.

This time the Dimension Data rider left nothing to chance, beating Sunweb's Nikias Arndt by five seconds after the pair had out-foxed seven others in the leading group by going right around a roundabout, rather then left like everyone else.

That masterful move came 2.5km from the finish and Boasson Hagen then polished off Arndt with ease without the need for a sprint. Belgium's Jens Keukeleire (Orica) came home third.

"I was surprised they all went left but sometimes you just follow the guy in front," the 30-year-old former Team Sky man said. "Inside the last two kilometres or so, I made a final attack and nobody could follow. I'm really happy.

"I could have won a sprint but I managed one last attack and I didn't have to have a photo finish so I'm happy about that," he added, referring to stage seven when he was edged out by Marcel Kittel despite inconclusive photographic evidence.

While there was some excitement at the finish, there was precious little going on behind a day-long 20-man escape group with Froome's Team Sky colleague forming a white wedge at the front of the peloton to keep their leader out of trouble.

Froome had emerged from two gruelling days in the Alps with a 23-second lead over Bardet and 29 on Rigoberto Uran and was never going to take any chances with Paris in sight.

Sky's white train followed sport director Nicolas Portal's brief to the tee, allowing the escapees 10 minutes grace to avoid what could have been a risky massed bunch finish.

Barring a crash in Marseille, where Froome will be a favourite, he will claim a fourth Tour title in five years. However, he is still not relaxing.

"It's still all to race for, there's still only 30 seconds between the top three," Froome said.

"It had been full gas for two days in the Alps so grateful it was a less crazy stage today and we could sit on the wheels a bit and recover some energy ahead of tomorrow's time trial."

Sunweb's Michael Matthews virtually wrapped up the green points jersey and just needs to finish safely in Paris to become the third Australian to win the category.

Matthews's team mate Warren Barguil also just needs to finish in Paris to win the king of the mountains title.