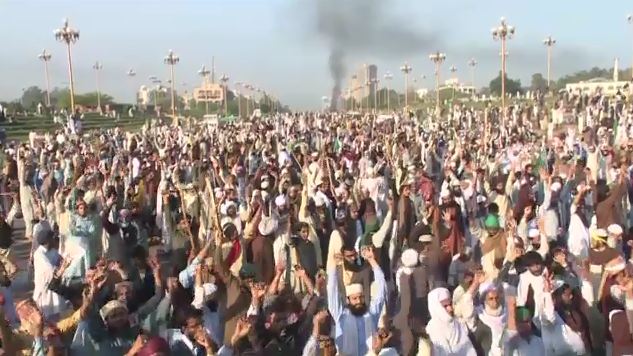 ISLAMABAD (92 News) – As the dialogues between government and religious parties underway after the religious parties continued to stage sit-in in D-Chowk on the fourth consecutive day, Prime Minister Nawaz Sharif chaired a high level meeting on Wednesday. Federal Minister for Railway Khawaja Saad Rafiq has on Wednesday presented report on dialogues during a high level meeting chaired by the prime minister. During the meeting, Interior Minister Chaudhry Nisar declared Punjab police responsible for not stopping the protesters and said that the protesters should have been stopped in Rawalpindi. “The first priority is to end the sit-in peacefully,” he said. Hundreds of supporters of Mumtaz Qadri, who was hanged last month, continued their sit-in for the fourth day outside the Parliament House in Islamabad’s Red Zone today (Wednesday). The government has held several rounds of talks with the protesters and the next round of talks will start today, while leaders of religious parties have expressed hope for progress in negotiations, while in case of the failure of talks the D-Chowk will be vacated on the orders of Interior Minister Chaudhry Nisar. The government has finalized a plan and the operation could be carried out against the protesters at any time tonight to disperse the protesters. On the other hand, a suspect who had entered the sit-in, was arrested and shifted to unknown place for further interrogation.