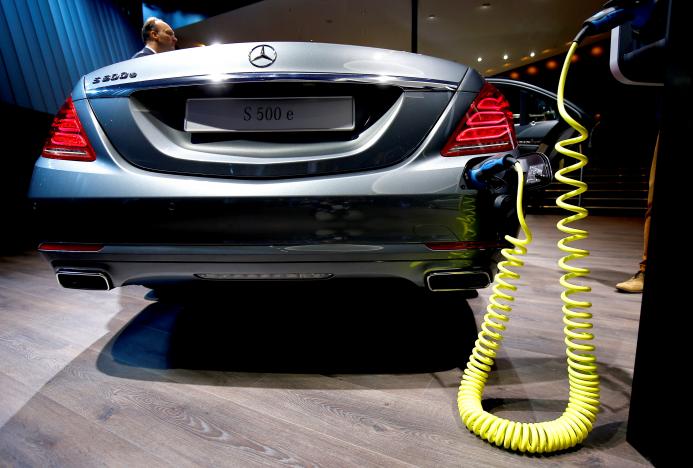 FRANKFURT – Daimler should avert possible job losses resulting from the expected substitution of conventional cars by electronic vehicles in coming years by making components for electric engines, the carmaker's top labor representative said. German carmakers are investing heavily in electric vehicles (EVs), spurred by advances in battery technology and amid a growing backlash against the environmental impact of diesel fumes. The maker of Mercedes-Benz luxury cars plans to launch at least six, and possibly as many as nine, electric car models as part of its push to compete with Tesla and Audi. Electric engines require fewer workers to build than those needed for more complex combustion motors, and to counteract the reduction in labor Daimler should produce more EV parts itself, works council chief Michael Brecht said in an interview with Reuters. "The number of staff you need to build a combustion engine is roughly tenfold compared to the number of staff for an electric engine," said Brecht, who is a vice chairman of Daimler's supervisory board. Daimler is the world's leading premium car maker, employing 284,000 people. Similar to other listed German companies, half of its supervisory board is made up of labor representatives who collectively have power to block company decisions. Brecht said Daimler's works council had agreed with top management to examine the possible effects of electric mobility on employment at all of the group's sites, expanding research conducted in 2012 that was confined to an engine-making facility. The site that would be hardest hit by the shift to electronic cars would be Untertuerkheim in Stuttgart, where 19,000 are employed to make engines, transmissions and axles. But Brecht added that plants like Rastatt, where compact models are assembled in southwest Germany, would also be affected. "We want the German Daimler sites to participate in the company's electric car strategy, not only in research and development but also in manufacturing," said Brecht. Separately, the labor boss urged caution on Chief Executive Dieter Zetsche's push to move employees into collective so-called swarm organizations as part of his drive to encourage entrepreneurial freedom and a more experimental approach to products. –Reuters