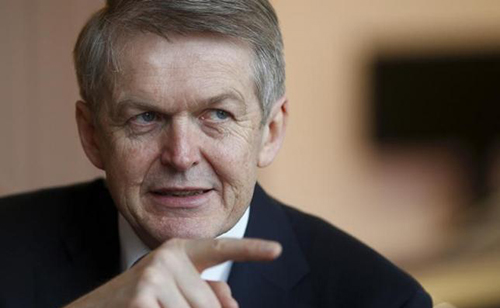 FRANKFURT – Germany's Daimler will lift the curtain on its much-anticipated long-distance electric car at the Paris Motor Show in October, as the automaker gears up to compete with Tesla Motors Inc's Model X sport-utility vehicle (SUV). The company will display a prototype of an electric-powered Mercedes car with a 500-kilometre (310 miles) range, Chief Development Officer Thomas Weber said this week in Stuttgart at an event for journalists. "The structure is ready, the teams are working and the initial results from road tests are coming in quick succession," he said. Weber did not specify how soon the car would hit the road but said it would be sometime this decade. Daimler and European rivals are stepping up investments in electric vehicles in order to meet new EU pollution targets and catch up with U.S. battery-car specialist Tesla. The German government has also announced subsidies for buyers of electric and other less polluting cars. German competitor Volkswagen's (VOWG_p.DE) subsidiaries Audi and Porsche have already unveiled long-distance electric prototypes, while BMW is working on one. Weber also said Daimler would launch its fourth-generation electric Smart car at the end of the year in both two and four-seater variants. Daimler currently offers two fully electric cars under its Smart and B-class models and a host of plug-in hybrids, powered by a combined battery and combustion engine. Further hybrid models are in the pipeline. The company is aiming to sell more than 100,000 electric cars a year by the end of the decade, Weber said. He declined to provide the sales figure for 2015. Daimler has also been working on fuel cell powered cars, which run on electricity generated by hydrogen. It initially planned to launch such a vehicle in 2014 but had to postpone, blaming pricing issues. The fuel cell operated SUV GLC, likely to compete with Toyota's Mirai, is now expected to enter production next year. –REUTERS