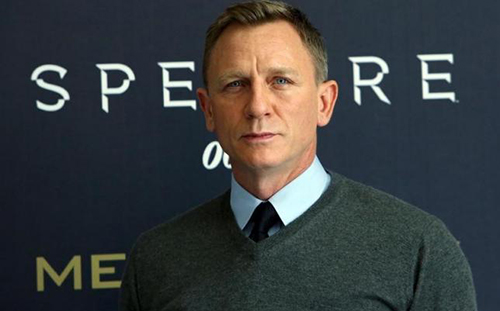 LONDON- The team behind the James Bond films wants Daniel Craig to return as 007, the spy series' executive producer said on Friday, even after the British actor said he would rather slash his wrists than appear again. The 48-year-old star was "absolutely the first choice ... We would love Daniel to return as Bond," Callum McDougall told BBC radio. Craig said last year he was "over" the role after filming wrapped up on the last installment "Spectre", which went on to gross $880 million worldwide. When asked if he could imagine doing another Bond movie, Craig told London's Time Out magazine: "Now? I'd rather break this glass and slash my wrists." His words triggered a flurry of speculation over who might appear next, with Idris Elba, Tom Hiddleston and Aidan Turner among the top contenders. Craig was widely praised for bringing a fresh grittiness to the role of the suave secret agent over four films, starting with Casino Royale in 2006. A report by RadarOnline earlier this month said Craig had already been offered $150 million by studio Sony to return for two more films. McDougall told the BBC that Bond producers Barbara Broccoli and Michael Wilson both shared his views. "I know they are hoping for him to come back," he said. – Reuters