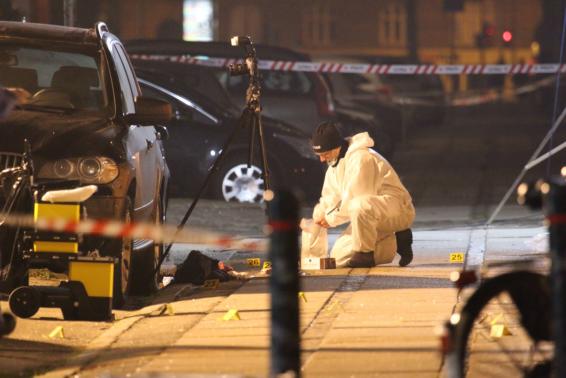 COPENHAGEN (Reuters) - Danish police shot dead a gunman in Copenhagen on Sunday they believe was responsible for killing two civilians and wounding five police in separate attacks on a synagogue and an event promoting freedom of speech. Prime Minister Helle Thorning-Schmidt said the shootings, which bore similarities to an assault in Paris in January on the offices of weekly newspaper Charlie Hebdo, were terrorist attacks. A man died in Saturday's shooting at a cafe hosting Swedish artist Lars Vilks, who has received death threats for blasphemous cartoons. Vilks was unhurt. A security guard died in a separate attack overnight at a nearby synagogue. Police had released a photo of the suspect, dressed in a heavy winter coat and maroon mask. But the motivations of the gunman, who police said was armed with an automatic weapon, were not known. Danish police had launched a massive manhunt with helicopters roaring overhead and an array of armored vehicles on the usually peaceful streets of Copenhagen. Police said they shot dead the suspect near a train station in Norrebro, an area in Copenhagen not far from the sites of the two attacks. Police said he had fired on officers. Some local media said police raided an apartment in the area. "We assume that it's the same culprit behind both incidents... that was shot by the police," Chief police inspector Torben Molgaard Jensen told reporters. French ambassador Francois Zimeray attended the cafe event, entitled "Art, Blasphemy and Freedom of Expression", and praised Denmark's support for freedom of speech following the Paris attacks. Witnesses said the envoy had barely finished his introduction when up to 40 shots rang out, outside the venue, as an attacker sprayed the cafe's windows with bullets. A 55-year-old man died as a result of that shooting, police said early on Sunday. Witnesses said police who were at the heavily-guarded venue fired back at the attacker. Vilks was taken to a back cold storage room for protection. "The rather spare audience got to experience fear and horror - and tragedy. I can't say it affected me as I was well looked after," Vilks wrote in a blog post. Hours later, shots were fired at a synagogue about a half hour's walk from the cafe. A man guarding the synagogue was shot in the head and died later. Two police officers were wounded. "He was a member of the community, a fantastic guy," Rabbi Bent Lexner, Denmark's former chief rabbi, told Israeli Army Radio. "We are in shock. I am sitting now with the parents of the man killed. We didn't think such a thing could happen in Denmark."