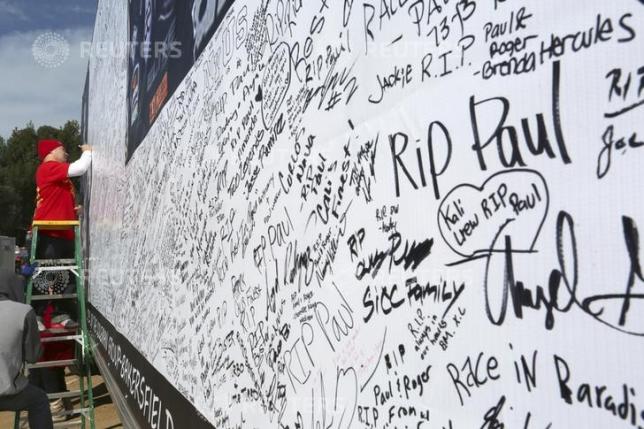 LOS ANGELES – The daughter of late actor Paul Walker, who died in the fiery crash of a Porsche sports car in California two years ago, filed a wrongful death lawsuit against the car company in Los Angeles on Monday, court records show. Meadow Walker claimed in the complaint that the automaker skimped on safety features for the vehicle, which could have either prevented the crash entirely or at least kept Walker alive. Paul Walker was a passenger in the 2005 Porsche Carrera GT driven by Roger Rodas, who lost control of the vehicle before it careened into trees and a utility pole in Santa Clarita, northwest of Los Angeles, killing both men in November 2013.
The suit said Porsche AG (PSHG_p.DE) knew the car model had a "history of instability and control issues" and added that the seat belts were designed such that in a crash, the shoulder belt anchor would be pulled along with the rear engine compartment while the seat anchor would remain in place.
"This snapped Walker's torso back with thousands of pounds of force, thereby breaking his ribs and pelvis, flattening his seat and trapping him in a supine position, where he remained alive until the vehicle erupted into flames one minute and twenty seconds later," the filing said. "Absent these defects in the Porsche Carrera GT, Paul Walker would be alive today," the complaint added, citing the seat belt design and other issues. Porsche could not be immediately reached for comment on Monday. But attorneys for the German car company said in April that Rodas was to blame for the crash following a lawsuit filed by his widow against the company's North American unit last year. Attorneys for the company had then denied that the car had any defects. Walker's death at the age of 40 led to a temporary halt in production of "Fast & Furious 7", the latest movie in the successful series about illegal street racing that helped popularize his career. The Los Angeles Times has reported that the Los Angeles County Sheriff's Department and California Highway Patrol found that unsafe speeds were to blame for the crash, not mechanical problems. The newspaper said investigators made the determination after consulting with technicians from Porsche. –Reuters