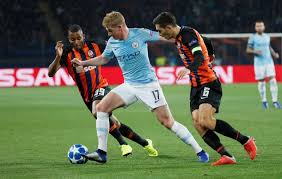 (Reuters) - Manchester City midfielder Kevin De Bruyne is worried about the state of the Wembley pitch for Monday’s Premier League clash against Tottenham Hotspur as the venue will host an NFL game the previous day.
The Philadelphia Eagles play the Jacksonville Jaguars on Sunday, and De Bruyne said he had played on a pitch that had earlier hosted an NFL game in preseason. “It’s going to be difficult. I’m not sure how it’s going to be. We hope it will be OK and that we can play like we normally do,” he told British media. De Bruyne, returning from a knee injury, started in City’s 3-0 win over Shakhtar Donetsk in the Champions League on Tuesday.