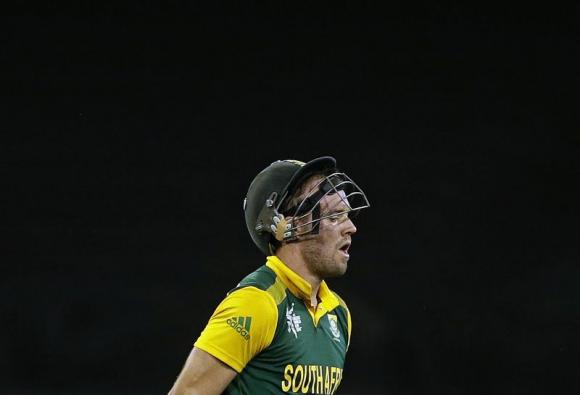 MELBOURNE (Reuters) - South Africa captain AB de Villiers will turn to his senior players to help lift the team out of the doldrums after they suffered a "big knock" to their confidence in a crushing defeat by India at the Melbourne Cricket Ground on Sunday. Dominated with bat, ball and in the field, South Africa's 130-run loss was their first to India at a World Cup and an alarming setback for a team tipped to dominate on the southern hemisphere wickets of Australia and New Zealand. Adding insult to injury, the team were fined for a slow over rate and leading seamer Vernon Philander may be sidelined after sustaining an injury to his left hamstring. Losing the toss was a blow, allowing India's batsmen the best of a slow wicket on a stifling hot day, but a deflated De Villiers was at a loss to explain his batsmen's collapse for 177 after being set 308 for victory. "It's a big knock for us to get beaten by 130 runs," he told reporters. "It's almost embarrassing. You never want to lose by that amount of runs. You always want to be a competitive team, feel like you're always in the game, feel like you've got a chance to win games. "We pride ourselves on that, and it didn't happen today. We're going to have to lick our wounds for a while. "Your confidence takes a bit of a knock with performances like that, and it's up to the senior group of players to make sure that confidence is still there come Friday against the West Indies. "Little things like today's performance can creep into your game if you start thinking about it too much, and if you allow it to knock your confidence down." De Villiers was particular incensed that two wickets fell through run-outs, including his own dismissal for 30 when he and Faf du Plessis had compiled a steadying 68-run partnership. Middle order batsman David Miller was also run out for 22 as the jumpy South Africans struggled with the pressure of a disciplined Indian bowling effort. The last seven wickets fell for 44 runs as South Africa's middle and lower order withered. "(West Indies) is a must-win for us in Sydney, but for now I just want to sort of go feel sad in my room for a while, and we'll see again how I feel tomorrow," De Villiers added.