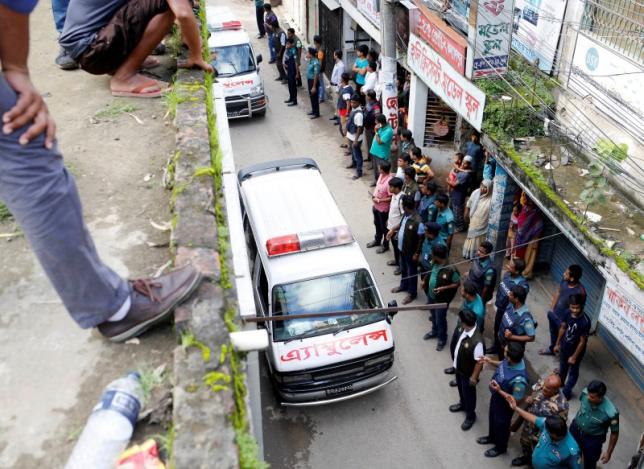 DHAKA - One of nine suspected militants killed in a police raid in Bangladesh this week was a Bangladeshi-American who was a friend of one of the gunmen who attacked a cafe on July 1 killing 22 people, police said on Thursday. The attack on the Holey Artisan Bakery, a cafe in Dhaka's diplomatic quarter, was one of the most brazen militant assaults in the country's history. Most of the 22 people killed were foreigners and police have been scouring the country for accomplices of the five gunmen who were all killed when police ended the siege. On Tuesday, police raided a building in a Dhaka suburb and killed nine militants, who police said were from the same domestic group as the cafe attackers, and who had been plotting their own similar attack. Seven of the nine dead militants had been identified from their fingerprints, which are taken when national identity cards are issued, and one turned out to a wanted Bangladeshi-American, said Dhaka police spokesman Masudur Rahman. "Shazad Rouf, 24, was an American passport holder and had been missing for six months," Rahman told Reuters. Rouf's father had filed a missing person report for him on Feb. 6, the spokesman said, adding that Rouf had been wanted by police in connection with a case filed under an anti-terrorism law on suspicion of plotting a subversive act. Also wanted in connection with that case was one of Rouf's friends, who was also one of the five cafe attackers, Nibras Islam, Rahman said. Rouf was from a well-off family in Dhaka, Rahman said, though adding he had no information about his US connection. A US embassy spokesman declined to comment immediately. Islamic State (IS) claimed responsibility for the cafe attack but the government has dismissed suggestions the group has a presence in the country. Instead, authorities have blamed the banned Jamaat-ul-Mujahideen Bangladesh domestic group, which has pledged allegiance to Islamic State, for the cafe attack. In the past year, al Qaeda and Islamic State have made competing claims over the killings of liberals and religious minorities in the mostly Muslim nation of 160 million people. While authorities blame the violence on domestic militants, security experts say the scale and sophistication of the cafe attack suggested links to a trans-national network. Islamic State has warned that violence would continue until Islamic law was established worldwide, saying in a video the Dhaka cafe attack was just a glimpse of what was to come. -Reuters