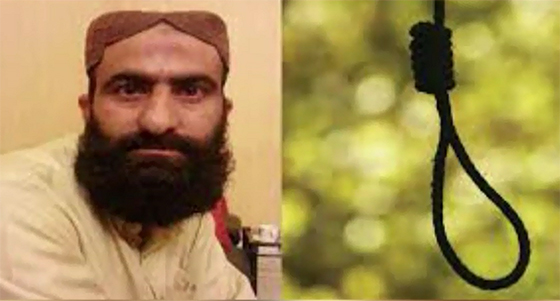 KARACHI (92 News) – Death-row prisoner Shafqat Hussain, convicted of killing a child in 2001, was hanged early on Tuesday at the Karachi Central Prison. Shafqat was arrested and sentenced to death in 2004 by the Anti-Terrorism Court for the kidnapping and murder of a seven-year-old boy, who lived in a Karachi apartment building where Shafqat worked as a security guard. The Anti-Terrorism Court first issued the death warrant of Shafqat Hussain in March but his hanging was delayed due to the interference of Non-Governmental Organisations (NGOs). All the courts including Sind High Court, Islamabad High Court and Supreme Court had turned down the review petitions the matter of Shafqat’s juvenility at the time of arrest. The anti-terrorism court issued the death warrants of Shafqat Hussain for the sixth time on August 4. Before being hanged, the authorities allowed Shafqat Hussain to meet his family for one last time. Talking to media outside jail, the parents of Shafqat Hussain said that baseless reports have been circulated regarding the juvenility of Shafqat, adding that he was less than 18 years when he was sentenced to death.