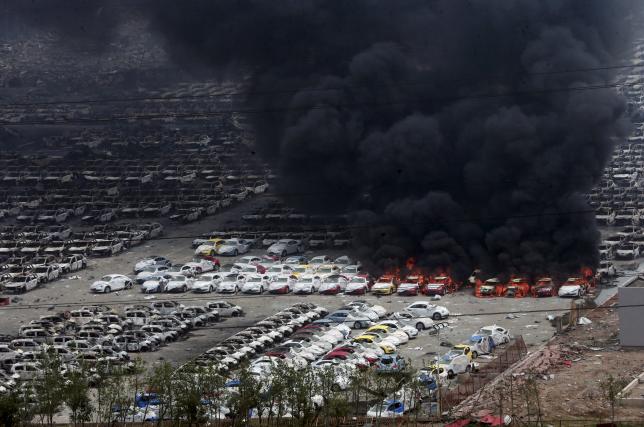 TIANJIN, CHINA - The death toll from two massive explosions that tore through an industrial area in the northeastern Chinese port of Tianjin has risen to 104, state media said on Saturday, as China's president urged improvements in workplace safety. Chinese President Xi Jinping said authorities should learn the lessons paid for with blood in Wednesday warehouse blasts, according to the official Xinhua news agency. The number of people killed had previously been put at 85. China evacuated residents who had taken refuge in a school near the site of two huge explosions, state media said, after a change in wind direction on Saturday prompted fears that toxic chemical particles could be blown inland. It was not clear from media reports how many people were evacuated. The evacuation order came as a fire broke out again at the site of Wednesday's blasts, a warehouse specially designed to store dangerous chemicals, according to Xinhua. Evacuees were advised to wear long trousers and face masks as they "evacuated in an orderly fashion", according to a post on the official microblog of the Tianjin branch of the National Health and Family Planning Commission of China. The streets appeared calm. But not all was clear amid emotional scenes as families of missing fire fighters sought answers about their loved ones and officials tried to keep media cameras away. Gong Jiansheng, a district official, told reporters there had been no evacuation. SURVIVOR FOUND In one piece of encouraging news, a 50-year-old man was rescued 50 meters away from the blast zone, Xinhua said. The man was suffering from a burnt respiratory tract but was in a stable condition after surviving three days in a shipping container, the official China Central Television (CCTV) and Xinhua said. Chinese police confirmed for the first time the presence of deadly sodium cyanide at the site of the blast as a series of new, small explosions were heard and small fires broke out. Police confirmed the presence of the chemical, fatal when ingested or inhaled, "roughly east of the blast site", the state-run Beijing News said. It did not say how much had been found or how great a risk it posed but residents expressed concern about the air and water. "I do feel a bit afraid," said construction worker Li Shulan, 49, when asked about the air quality. "It definitely doesn't feel good. As you can see our boss is making us wear masks." An area three km (two miles) from the blast site was cordoned off, the Beijing News said. No cyanide had been found in the ocean surrounding the port, said the State Oceanic Administration of China in a post on its official website. At an afternoon news conference, officials declined to discuss pollution concerns, referring journalists to other departments. FAMILIES DESPERATE FOR INFORMATION There were about seven small explosions in the area on Saturday, according to a post on the micro-blog of CCTV. A fresh blaze ignited cars in a parking lot next to the blast site. The cause was not immediately clear. State media carried reports of other fires in the area. A retired environmental official earlier told reporters that air pollution posed no risk. Harmful substances could not be detected in the air from 17 monitors placed around the city, he said. About 6,300 people have been displaced by the blasts with around 721 injured and 33 in serious condition, Xinhua said. Shockwaves from the explosions were felt by residents in apartment blocks kilometers away in the city of 15 million people. At least 21 of the dead were fire fighters. About a dozen family members of missing fire fighters tried to storm a press conference, angry at a lack of information. "We have gone to each and every hospital by ourselves and not found them," said Wang Baoxia, whose elder brother is missing. Media have said such fire fighters in China, often only on two-year contracts, lack training as new recruits. "There is no government official willing to meet us. Not even one," Wang said. Relatives said around 25 missing fire fighters were young contract workers not part of official city fire brigades. After Wednesday's blasts, fire crews were criticized for using water to douse flames which may have contributed to the blasts given the volatile nature of the chemicals involved. Industrial accidents are not uncommon in China following three decades of fast growth. A blast at an auto parts factory killed 75 people a year ago. - REUTERS