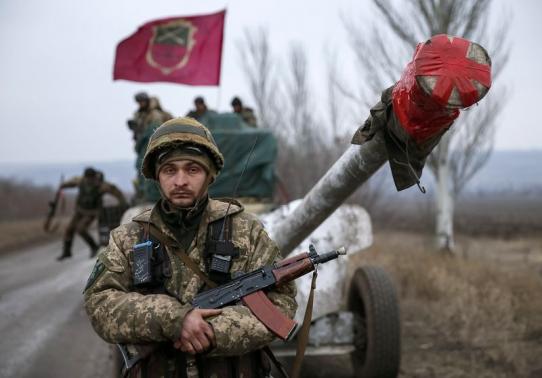 KIEV (Reuters) - Ukraine on Friday reported the first deaths in three days in east Ukraine, denting hopes a ceasefire will hold, and President Petro Poroshenko said Russia would pose a "military threat" even if the truce is solid. Government troops fighting pro-Russian separatists in the east began towing artillery away from the front line on Thursday, a sign that Ukraine's military recognised a ceasefire meant to take effect on Feb. 15 was at last holding. But Kiev's military later announced the deaths of three servicemen in the past 24 hours, following two full days without fatalities that had raised hopes of the truce holding. "Even under the most optimistic scenario ... the military threat from the east would unfortunately remain," Poroshenko said, referring indirectly to Russia in a televised speech at the National Defence University. Kiev and Western governments have accused Russia of sending troops and weapons to support the separatists in east Ukraine, despite a peace deal agreed in the Belarussian capital Minsk on Feb. 12, but Moscow has denied this. The situation in the conflict zone was "relatively calm" overnight, Ukrainian military spokesman Anatoly Stelmakh said, although he reported isolated attacks by rebels on Ukrainian troop positions. Ukraine continued to withdraw its weapons on Friday, but the army will remain on high alert in case of a new offensive from the separatists, Defence Ministry spokesman Serhiy Galushko said in a televised briefing. "Sufficient troops and resources remain along the front line in case the terrorists and the forces supporting them violate the ceasefire," he said. The rebels, who committed to the truce only after seizing a strategic town in a humiliating defeat for Kiev, have been pulling back heavy weapons since Tuesday. Kiev says it fears the rebels could be regrouping and preparing to attack Mariupol on the Sea of Azov, as capturing the port city would help open up a corridor to the Crimea peninsula which Russia annexed from Ukraine last year following the overthrow of a Moscow-leaning president in Kiev. Military spokesman Andriy Lysenko said a convoy of GRAD missile systems and other equipment had been tracked leaving rebel-held Donetsk in the direction of Mariupol. Moscow has in turn raised doubts about Kiev's commitment to the ceasefire and asked whether the United States and the European Union, which have imposed economic sanctions on Russia, really want the Feb. 12 peace deal to succeed.