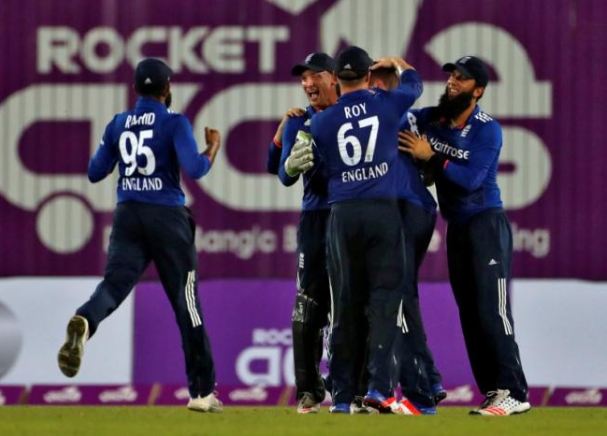 MIRPUR – Jake Ball made a memorable one-day debut as he combined with Adil Rashid to derail Bangladesh's chase and bowl England to a thrilling 21-run victory in the first match of the series in Mirpur on Friday. Needing 310 to win under lights, Imrul Kayes struck a blistering 112 and Shakib Al Hasan chipped in with a breezy 79 to raise Bangladesh hopes before they collapsed in dramatic style, bowled out for 288 in the 48th over. Paceman Ball finished with 5-51 to take the man of the match award while leg-spinner Rashid claimed 4-49, having also run out Shafiul Islam with a direct throw. Earlier, Ben Stokes smashed a maiden one-day century, Ben Duckett struck a mature half-century on his 50-over debut and skipper Jos Buttler smashed a 38-ball 63 to help England post 309 for eight after opting to bat on a humid afternoon. Bangladesh were 153 for four in the 27th over of their reply when Kayes joined up with experienced all-rounder Al Hasan to drag them back into the game with a 118-run partnership in 15.2 overs. The home team seemed to be cruising to victory, needing 54 in the last 10 overs with six wickets in hand, when Ball picked up two wickets in two balls and Rashid provided a two-wicket burst to wreck their chances. England did not miss regular one-day captain Eoin Morgan and opening batsman Alex Hales, who opted out of the tour over security concerns, as they posted an imposing total at the Shere Bangla National Stadium. At 63 for three in the 13th over, they looked in a spot of bother before Duckett and Stokes shared a stand of 153 to lay the foundation for a big total. Duckett was then bowled for 60, playing across a low full toss from Islam. Stokes dominated their partnership, clobbering four sixes and eight fours in an almost run-a-ball 101. The stage was set up perfectly for another swashbuckling knock from Buttler and he thumped four sixes and three fours as England plundered 60 off the final five overs. Bangladesh cut a sorry figure in the field, dropping Stokes twice and suffering from indecision as to who would go for a catch on two other occasions. The teams return to the same venue for the second match on Sunday. –Reuters