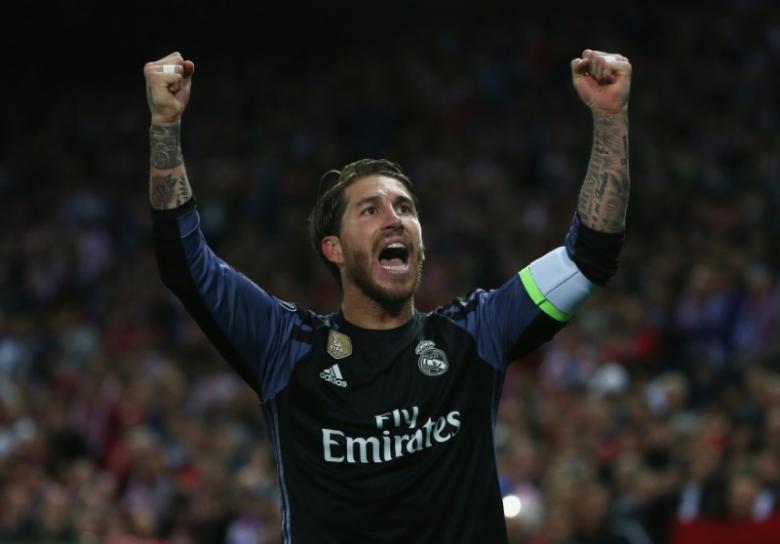 MADRID - Real Madrid captain Sergio Ramos has broken Atletico Madrid hearts and silenced fans of Napoli and Barcelona so few people would be surprised if he cements his reputation on the biggest stage in Saturday's Champions League final against Juventus.

Striking a balance between the glamour of David Beckham and the never-say-die warrior spirit of the late Juanito, central defender Ramos is Madrid's spiritual leader, a colossal force in both boxes yet also prone to moments of madness.

Ramos has threatened to cost his team almost as often as he has saved them, holding the record of 22 red cards at Real, almost double the tally of nearest challenger Fernando Hierro.

His tally of dismissals is rarely pored over for long, though, such is his habit of getting Real out of jail.

His most famous last-gasp strike was a 93rd minute equaliser in the 2014 Champions League final against Atletico which led to Real's extra-time triumph, while Sevilla, Barca, Deportivo La Coruna and Real Betis have been his unlucky victims this season.

"Ramos represents the values of Real Madrid, the spirit of doing anything to win," coach Zinedine Zidane has said.

"For me those values are commitment, battling and fighting until the last minute. This club has taught me that and as our captain Sergio represents this. He's a noble player."

Ramos's self confidence can be traced as far back as 2005 when he signed for a Real Madrid side containing Beckham, Luis Figo and Zidane for 27 million euros (23.5 million pounds), a record for a Spanish teenager, and said he wanted to captain the club.

Even though he is one of Real's highest paid players, and has a celebrity girlfriend in television presenter Pilar Rubio, Ramos likes to talk about his humble roots in the working class town of Camas outside Seville.

Last month when the Champions League semi-final tie between Real and Atletico was being billed as the haves versus the have nots, Ramos took offence.

"It seems like here we have grown up in Beverly Hills," he said. "Here there are people from humble backgrounds too. The sacrifice you make is what fills you with the desire to win."

The man who has built a reputation for late goals said he would rather have a night free of nerves, however. "We hope we can resolve the game before and that our fans don't have heart attacks," he said. "I want to enjoy it and not have to wait so long to win." -Reuters