Defeat for England against Afghanistan would be horrendous, says assistant coach Farbrace 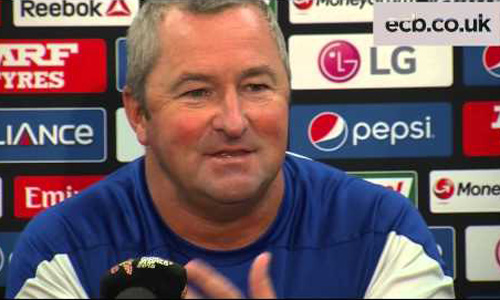 Defeat for England against Afghanistan would be horrendous, says assistant coach Farbrace

SYDNEY - Defeat in Fridays' final pool match would be "horrendous" and the whole England World Cup party is resolutely focused only on beating Afghanistan, assistant coach Paul Farbrace said on Thursday. England, who have been pilloried since losing to Bangladesh on Monday to end their hopes of reaching the quarter-finals, have one last chance to impress at the tournament during the match against the World Cup debutants at the Sydney Cricket Ground. While there would undoubtedly be a post mortem of what went wrong at the World Cup, Farbrace said, that would have to wait for later. "For now, I promise you, the only focus is trying to get us in a great position where we can win tomorrow's game," he told reporters. "If losing the other day to Bangladesh was terrible, we couldn't possibly measure what it would be like if it (went) against us because that would be horrendous. "Our job now is to make sure we give ourselves the best chance, clear heads and go and play the cricket that we've said we wanted to play all the way through." Farbrace said criticism of under-fire coach Peter Moores for being obsessed with data was wide of the mark based on his time as coach of Sri Lanka team, who relied on statistics. He also felt that the whole backroom staff needed to take the blame for the debacle. "We can have no complaints about some of the stick that we've taken, because it just hasn't been good enough," he added. "(But) we're in this together as a team. We're all responsible. It's not just Pete. We're all responsible. You win as a team, you lose as a team, and every single member of the coaching team has to share that responsibility with Pete." Afghanistan have already got a win in their maiden campaign against Scotland and Hamid Hassan thinks they have a chance of another if he and his fellow quicks can get amongst the demoralised English batsmen. "If we go to the plan and we bowl consistent in good areas," he said. "So maybe we can take them as soon as possible. We have a very good bowling attack, and hopefully we'll do some good performance tomorrow against England." The tall paceman, whose face paint, bandana and exuberant celebrations have made him a cult figure at the tournament, bridled when it was suggested the Afghans might fear England. "Scared? Afghan never scared, never scared," he said. "No fears, no nothing. We have to play always brave. So we'll play tomorrow brave. Afghan is never scared." –Reuters