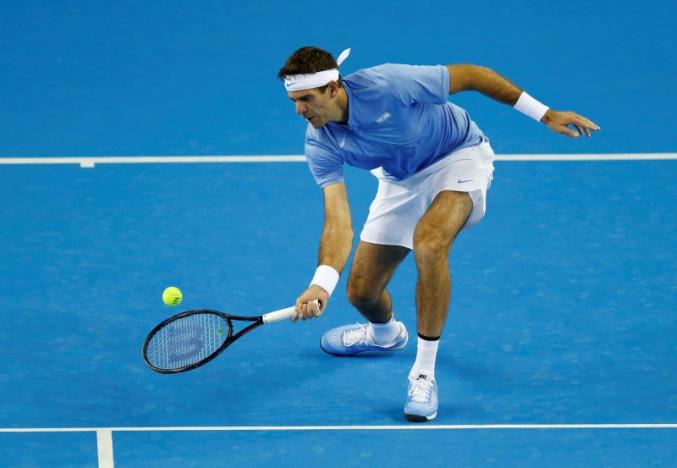 GLASGOW – Juan Martin del Potro delivered a huge blow to Britain's hopes of retaining the Davis Cup when he beat Andy Murray 6-4 5-7 6-7(5) 6-3 6-4 in a five-hour thriller as Argentina grabbed a 2-0 lead in their world group semi-final on Friday.
World number two and Wimbledon champion Murray looked poised to chalk up his 30th victory in 32 Davis Cup matches when he led by two sets to one against the man he beat in last month's Rio Olympics singles final. But Del Potro, ranked 64th in the world after being plagued by numerous injuries, refused to surrender and condemned Murray to only his third singles defeat in the men's team competition after finishing off the marathon encounter with an ace. "I won but I still remember Olympic final. This is very important to me and my team and we are looking to reach another final in the Davis Cup," Del Potro said courtside. "Against Andy you never know when the match will finish. He is a dangerous player, a fighter and great champion. In end I played good forehands and good serves and that was key. "I am so happy to be playing tennis again after three surgeries. This kind of moment was what I was missing..." Britain's day went from bad to worse in Glasgow as Guido Pella then beat Kyle Edmund 6-7(5) 6-4 6-3 6-2 in the second singles. Friday's defeats mean the hosts have to win the three remaining rubbers if they are to reach the final for the second year running. The big serving Del Potro capitalised on Murray's mistakes to take the first set, which included one rally of 41 strokes. Towards the end of the second, both players, while appreciating the backing of their respective supporters in a noisy crowd, were upset by excitable calls of "out" from spectators. That happened on the final point of the set to Del Potro's fury, the umpire declining to replay it. He recovered his composure in the third set, taking two of the three successive breaks of serve while running up a 5-3 lead.