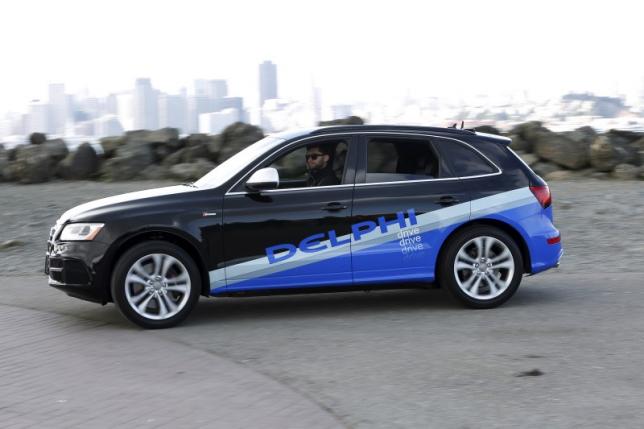 SINGAPORE – Delphi Automotive Plc will launch a small test fleet of automated taxis in Singapore next year, aiming to ferry passengers around a city district in one of the first real-world tests of automated rides on demand, the company said on Monday. The project, run in partnership with the Singapore Land Transport Authority, will road test a concept that many companies investing in automated driving believe offers the fastest path to making such technology commercially viable. A cab ride in a dense urban area can cost $3 to 4 a mile, Delphi vice president of engineering Glen DeVos said in an interview. “We think we can get to 90 cents a mile” with an automated vehicle. That drops the price of transporting goods and people, and allows for the costs of automated driving systems to be spread over hours of operation and multiple users. Initially, the cars will have drivers ready to take over if the piloting systems fail, DeVos said. But by 2019 or 2020, “we’ll have removed drivers from the car,” Glen DeVos, Delphi’s vice president of engineering said in an interview. By 2022, Delphi plans to launch a regularly operating automated cab service, the company said. The company said it plans similar projects in North America and Europe. A United States site could be selected later this year, DeVos said. Delphi plans to start the project with a fleet of Audi vehicles equipped with automated driving and mapping systems. Later, DeVos said the project will expand with the addition of electric vehicles. Other companies are studying the economics of using automated driving systems to replace human drivers in taxi or ride-hailing services, including Uber Technologies Inc [UBER.UL] and Lyft, which is collaborating with General Motors Co. Delphi is working with other companies, including Israel's Mobileye NV, to develop the sensor systems to enable vehicles to operate autonomously. The Singapore Land Transport Authority will supply infrastructure to help vehicles navigate safely. Delphi is doing its own mapping, but DeVos said “we are looking at mapping alternatives including a service offered by Mobileye. The Singapore project was deliberately kept to a small scale, DeVos said. “We are going to do it incrementally in a very controlled manner,” he said. –Reuters