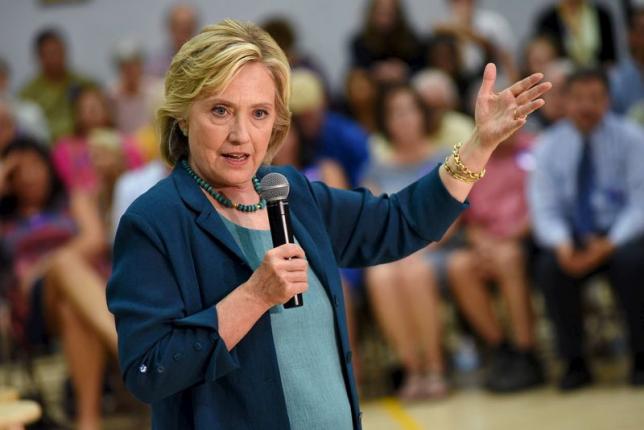 WASHINGTON - Democratic presidential candidate Hillary Clinton will unveil a plan this week to cap out-of-pocket costs for specialty drugs, she said on Monday, after her tweet accusing companies of "price gouging" sent biotech stocks tumbling. "I'm announcing a detailed plan to crack down on these abuses," Clinton said during a campaign stop in Little Rock, Arkansas. "There's no excuse," she added. Clinton is expected to discuss the specifics in Iowa on Tuesday. While Clinton has maintained her front-runner status among Democrats seeking their party's nomination for the November 2016 election, she has been under pressure to take more populist stances to widen her lead over the current second-place Democratic candidate, U.S. Senator Bernie Sanders. She could face more hurdles if Vice President Joe Biden enters the race. Clinton led a recent Reuters/Ipsos opinion poll with 48 percent support. Sanders already has introduced legislation in the Senate to crack down on what he called "skyrocketing" increases in prescription drug prices. On Monday, shares of biotech companies such as Immunogen and Gilead Sciences dropped after Clinton tweeted that steep prices for specialty drugs were "outrageous." Clinton pointed to a New York Times story about a 62-year-old drug to treat a deadly parasitic infection that soared in price to $750 a tablet from $13.50 after the drug was bought in August by a start-up pharmaceutical company. "It's disgraceful," Clinton said in Arkansas, referencing the drug prices in the story. "Big Pharma" companies have long been criticized for steadily raising prices of prescription medicines in the United States, unrestrained by price controls that are common in other countries. Also controversial has been a strategy by some companies to raise prices for older drugs that they acquire. Examples include the heart medications Nitropress and Isuprel, which were bought by Valeant Pharmaceuticals Inc this year. Specialty drugs are typically defined as high-cost prescription medications used to treat chronic or life-threatening conditions such as cancer. Clinton's comments on Monday were her first about how to tackle high drug prices, but she has talked about the problems facing consumers before. In June, Clinton said drug companies that benefit from a Pacific trade pact should offer bulk discounts on products to U.S. government programs such as Medicare. The iShares Nasdaq Biotech ETF, which tracks an index of biotechnology and pharmaceutical stocks, was down about 4.3 percent at 341.48 on Monday afternoon. The Nasdaq biotech index skidded 4.3 percent. For more on the 2016 presidential race, see the Reuters blog, "Tales from the Trail" (here). -Reuters