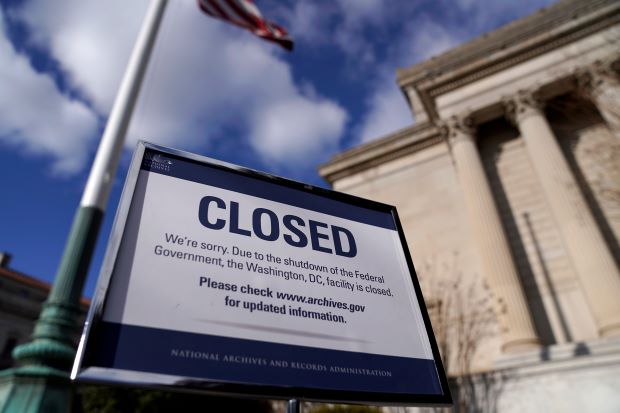 WASHINGTON (Reuters) - Democrats in the US House of Representatives plan to vote on Thursday on a funding package to end the 10-day-old partial US government shutdown, without providing the $5 billion President Donald Trump has demanded for a U.S.-Mexico border wall. The planned vote sets up a Democratic showdown with Trump’s fellow Republicans on an issue dear to the president on the first day of divided government in Washington since he took office in January 2017 with a Congress led by his own party. Democrats formally take control of the House from the Republicans after winning a majority of seats in November’s congressional elections. The two-part Democratic package filed on Monday in the House includes a bill to keep funding for the Department of Homeland Security at current levels through Feb. 8 with no new wall funding, as well as a bundle of six measures worth nearly $265 billion combined that would fund the other shuttered agencies through the September 30 end of the current fiscal year. The two parts will be voted on separately on the House floor on Thursday, said Democrats, who will hold a 36-seat majority. If approved in the House, the funding package would go to the Republican-led Senate. Its prospects there appear unpromising, although Trump’s unpredictability makes it hard to gauge how the shutdown showdown will play out. “It’s simple: The Senate is not going to send something to the president that he won’t sign,” said a spokesman for Senate Republican leader Mitch McConnell. The Democratic legislation will mark the first major battle pitting the incoming Democratic House majority led by Nancy Pelosi against Trump and McConnell. “While President Trump drags the nation into Week Two of the Trump Shutdown and sits in the White House and tweets, without offering any plan that can pass both chambers of Congress, Democrats are taking action to lead our country out of this mess,” Pelosi and top Senate Democrat Chuck Schumer said in a joint statement. Democrats oppose Trump’s demand for wall funding, with Pelosi calling the wall immoral, ineffective and expensive. Democrats hope their two-pronged funding approach will put Senate Republicans in a tough position. If they reject funding for departments unconnected to border security, Republicans could be seen as holding those agencies and their roughly 800,000 affected workers hostage to Trump’s wall demand. “Then they are complicit with President Trump in continuing the Trump shutdown and in holding the health and safety of the American people and workers’ paychecks hostage over the wall,” Pelosi and Schumer said in their statement. Non-border-related agencies include the Departments of Agriculture, Interior, Transportation, Commerce and Justice. The homeland security piece of the package includes $1.3 billion for border fencing and roughly $300 million more for other border security items including cameras and technology. Democrats said the entire package is based on legislation that has already been passed by either the Senate or Senate committees. The shutdown, which began on Dec. 22 and has idled roughly a quarter of the federal government, was precipitated by Trump’s demand, under pressure from conservative commentators, that Congress approve $5 billion to help fund a wall that was a promise made in his 2016 election campaign, although he said at the time it would be paid for by Mexico. Trump has called the wall crucial to combating illegal immigration and drug trafficking. The Senate on Dec. 21 failed to muster the votes needed to pass Republican-backed House legislation that included Trump’s wall funding. Passage in the Senate would need at least some Democratic support to reach the 60-vote threshold required.

A central issue in finding a resolution could be the definition of what constitutes a wall, including the idea of steel slats and other types of barriers versus a concrete structure. Trump on Twitter criticized Democratic opposition to the wall project, which carries a total estimated price tag of $23 billion. He also seemed to contradict comments made by outgoing White House Chief of Staff John Kelly. In a Los Angeles Times interview published on Sunday, Kelly said: “To be honest, it’s not a wall.” “The president still says ‘wall’ - oftentimes frankly he’ll say ‘barrier’ or ‘fencing,’ now he’s tended toward steel slats. But we left a solid concrete wall early on in the administration, when we asked people what they needed and where they needed it,” Kelly added. Trump wrote on Twitter that border security could not exist “without a strong and powerful Wall.” “An all concrete Wall was NEVER ABANDONED, as has been reported by the media,” Trump wrote. “Some areas will be all concrete but the experts at Border Patrol prefer a Wall that is see through (thereby making it possible to see what is happening on both sides). Makes sense to me!” Trump, who canceled his vacation in Florida and has stayed at the White House during the holiday government shutdown while first lady Melania and their son Barron were at Trump’s private estate Mar-a-Lago in Florida for New Year’s Eve, said Democrats could have come over for talks anytime. “I’m in Washington. I’m ready, willing and able,” Trump told Fox News. White House officials did not reply to an email asking whether the president had been in touch directly with Democratic leaders to set up a round of talks. Pelosi has not heard formally from the White House since December 11, when she and Schumer had a contentious Oval Office meeting with the president, Democratic aides said. Schumer has not heard from the White House since he met with Vice President Mike Pence and incoming White House acting Chief of Staff Mick Mulvaney on Dec. 22, Democratic aides said.