Demonstrations staged against ban on student unions across country

Demonstrations staged against ban on student unions across country

ISLAMABAD (92 News) – Students took out protest rallies and staged demonstrations against a ban on unions across the country. Rallies were taken out in Islamabad, Karachi, Peshawar and Lahore. In Islamabad, students gathered outside National Press Club and chanted slogans in favor of their demands, including an end to political interference, a reduction in fees and activation of policies regarding harassment of women. 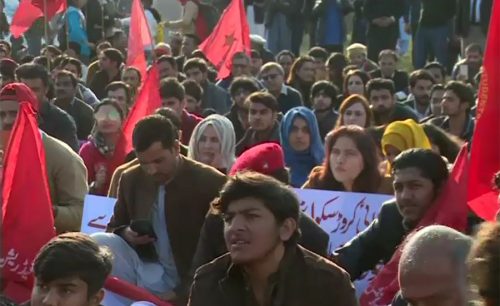 They said that their protest would continue till fulfillment of their demands. In Lahore, a large number of students from Punjab University participated in the Students Solidarity March and raised slogans against university administration. They demanded that a ban on the student unions should be ended across the country. 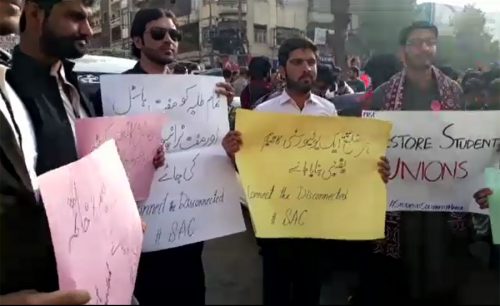 They demanded that equal education system instead of class-based education system should be imposed in the country. They also demanded that privatization of educational institutions should be completely banned. Federal Minister for Science and Technology Fawad Chaudhry announced full support for the student unions. https://twitter.com/fawadchaudhry/status/1200300827719733248?s=20 PPP chairman Bilawal Bhutto Zardari said that the PPP has always supported Student unions. https://twitter.com/BBhuttoZardari/status/1200333159663112192?s=20 “The restoration of student unions by Shaheed Mohtrama Benazir Bhutto was purposely undone to depoliticize society. Today students are marching in the Student Solidarity March for the restoration of unions, implementation of right to education, end to privatization of public universities, implementation of sexual harassment legislation, right to student housing and the demilitarization of campuses. The spirit of activism and yearning for peaceful democratic process from a new generation of students is truly inspiring,” he said.