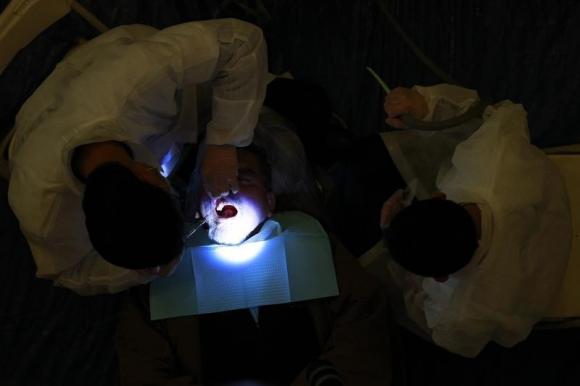 CALIFORNIA - Dentists may be able to screen patients for diabetes while cleaning their teeth, a small study suggests. Researchers found that testing for diabetes using blood that appears on the gums during a routine oral cleaning might be just as accurate as a standard screening that gets a blood sample by pricking the finger with a tiny needle. "There are more than 8 million people in US who have diabetes and don't know it, and many of these people see a dentist much more regularly than they see a primary care provider," said lead study author Sheila Strauss. "If dentists can screen for diabetes, it may help people get treated sooner when we can get better results managing their disease," said Strauss, an associate professor of nursing and co-director of the Statistics and Data Management Core for New York University's colleges of nursing and dentistry. Worldwide, nearly one in 10 adults had diabetes in 2014, and the disease will be the seventh leading cause of death by 2030, according to the World Health Organization. Most of these people have type 2, once known as adult-onset, diabetes, which is associated with obesity and aging and happens when the body can't properly use or make enough of the hormone insulin to convert blood sugar into energy. Strauss and colleagues focused their research on testing hemoglobin A1c, a protein in red blood cells that gets coated with sugar over time, making it a gauge of average blood sugar levels for the past two or three months. The researchers collected blood samples taken from the gums and the fingers of 408 people treated at dental clinics in New York City. They tested for diabetes, when A1c is at least 6.5 percent, and for elevated “prediabetic” A1c levels of at least 5.7 percent. To make sure they got enough blood from the gums, they only included people in the study who said that their gums bled when they brushed or flossed their teeth. The study team also limited participation to people at greatest risk for diabetes. To be included, people had to be at least 45 years old. Or, if they were younger, they had to be overweight and have at least one other risk factor such as an immediate family member with diabetes, a daily routine with little or no exercise, or an ethnicity or race with high diabetes risk, including Latino, black, Native American and Pacific Islander. The oral-blood and finger-prick test results matched in 97.8 percent of cases diagnosing diabetes, and in 92.9 percent of cases finding prediabetes. And, the oral blood test was able to accurately rule out diabetes 99.1 percent of the time, according to the results published in the American Journal of Public Health. –Reuters