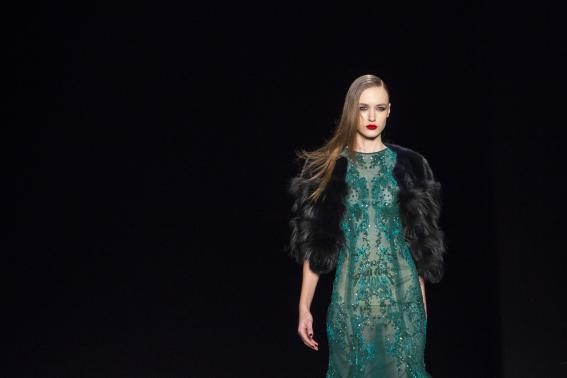 NEW YORK (Reuters) - With grandiose gowns, skin-skimming dresses and a nod to old Hollywood glamor, designers in New York served up couture treats to entice fashion's elite ahead of the world's most-watched runway at Sunday's Academy Awards red carpet. With stylists eying the upcoming Fall/Winter collections at New York Fashion Week in search of the perfect Oscars dress for their A-list clients, the stakes were high for designers as they opted for sophisticated elegance on the runway. "It moves the needle in terms of publicity and recognition," said James Mischka, of the design duo Badgley Mischka, about being featured on the red carpet. "It can make a career." Mischka and his partner, Mark Badgley, harkened back to old Hollywood style with dramatic, ornate gowns in rich brocades of red, black and blue, and long, shimmering dresses inspired by the 1941 bull fighting film "Blood and Sand" starring Tyrone Power. The look was luxurious, sensuous and dynamic, with jewels interwoven into the fabric and shapes inspired by futuristic architecture. "I think you will see bigger shapes on the red carpet this time," Mischka told Reuters before his runway show. "Women want to look like princesses these days; princesses and queens." CASCADING GOWNS, UNDULATING RUFFLES Even if a designer sends a gown to an actress, there is no guarantee that it will appear on the red carpet at the Academy Awards, thus drawing both designers and fashionistas into watching the Oscars live on Sunday for fashion surprises. Nina Garcia, creative director at Marie Claire Magazine, said fashions at the Oscars are always unpredictable, although dark colors and metallics have been popular choices on the red carpet so far this year, along with deep plunging necklines and one-shoulder gowns. "Considering who is nominated, I think it is going to be a cross between very sophisticated and very feminine,” she told Reuters. This year's nominees include Julianne Moore, Reese Witherspoon, Rosamund Pike, Felicity Jones and Emma Stone, all closely watched on the red carpet. Venezuelan-born designer Carolina Herrera, a favorite among stars such as Renee Zellweger, exuded sophistication and played with movement with full, billowing gowns in blues and grays, inspired by waves and water. Herrera paired a navy off-the-shoulder pleated bodice with a water colored, multi-ruffle bottom in a gown that was among the highlights of the show. "If one is looking for that uptown elegance of super-lux, then Carolina is a go-to choice," said Avril Graham, the executive fashion and beauty editor at Harper's Bazaar. HOLLYWOOD'S NIGHT TO SHINE Designer Monique Lhuillier is no stranger to the red carpet, with Reese Witherspoon, Halle Berry and Catherine Zeta-Jones donning her creations. Like Badgley Mischka, she found inspiration in a bygone age, taking her cue from the 1920s with deep tones of plum, midnight blue, teal and bronze for her sultry evening gowns. "I think you'll see a lot of close-to-the body silhouettes," Lhuillier said of the Oscars. "Women in Hollywood take such good care of themselves and this is their night to shine, so they do show a little skin and shape." Draped silk chiffon and satin fabrics featured prominently in her collection that included long-sleeved gowns and bias cuts that skimmed the body. Gowns in tulle and chiffon, lots of lace and embellished beading and embroidery were also popular among designers in looks that could be transported from the runway to the red carpet within days. "The jury is out," said Harper's Bazaar's Graham. "Certainly, designers will be keeping all fingers and toes crossed."