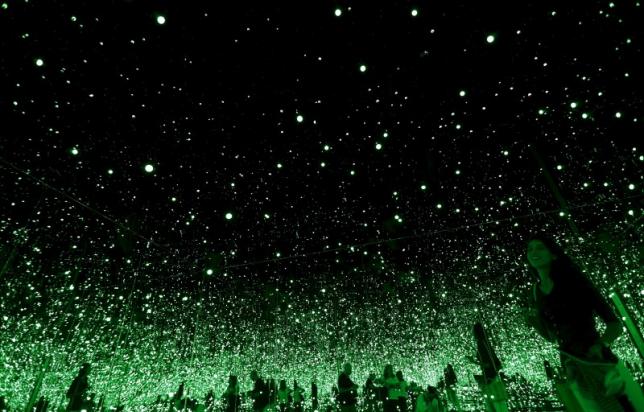 DUBAI - Abu Dhabi’s branches of the Guggenheim and Louvre museums may be long overdue, but that has not stopped the United Arab Emirates (UAE), better known to some for gold-vending machines and desert safaris, cementing its status as the region's art hub. Thanks to oil revenues, the desert nation of seven emirates has been on an art-investing binge for three decades that has, for those with deep pockets, made it the region's prime fine art market. Repeated delays suggest that both the Louvre and the Guggenheim are likely to miss their planned opening dates of 2015 and 2017 respectively in the UAE’s capital, but both museums are using the time to show previews of their future collections or borrowed works from their sister locations. The annual Abu Dhabi Art fair, held every November, also brings in the art lovers, but it is Dubai that is the real art marketplace of the Middle East. The emirate of 2.1 million people is home to branches of Christie's and Sotheby’s auction houses and countless galleries, making it the place where much of Middle East's fine art trade is done. [caption id="attachment_13810" align="alignnone" width="500"] 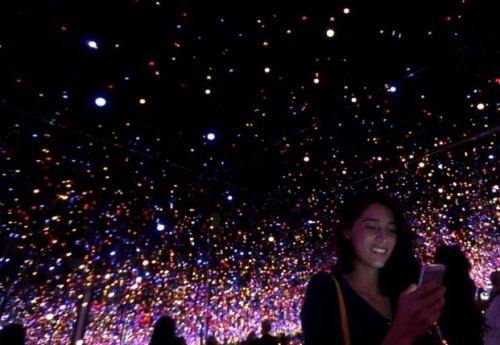 A tourist uses her phone inside the Infinity Mirrored Room by Yayoi Kusama from the Seeing Through Light selections from the Guggenheim Abu Dhabi collection at the Manarat Al Saadiyat Gallery in Abu Dhabi November 27, 2014. Reuters[/caption] Prices tend to start in the tens of thousands of dollars, and have risen sharply since 2008. But an alternative art scene on Al Quoz and Alserkal Avenue, where galleries such as The Third Line and Ayyam Gallery are located, provides a more affordable alternative. A visit to the XVA Gallery in the historic but remodeled Bastakiya district led to an encounter with the Iraqi artist Halim al-Karim, who has made Dubai his home. [caption id="attachment_13811" align="alignnone" width="500"] 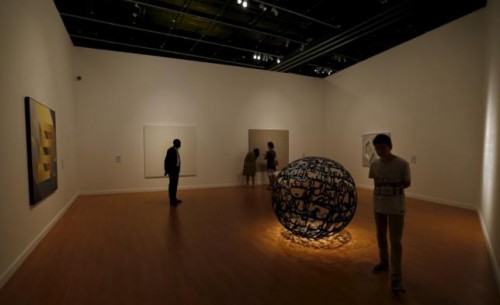 Tourists look at artwork from the Seeing Through Light selections from the Guggenheim Abu Dhabi collection at the Manarat Al Saadiyat Gallery in Abu Dhabi November 27, 2014. Reuters[/caption] "There is real art life here," he said. "Even if the market goes up and down, the art will go on." Even Sharjah, the most conservative of the UAE's seven emirates, has been hosting biennial art fairs since 1993, and Kito de Boer, an avid collector who has been based in Dubai since 1990, says it is not all about money. [caption id="attachment_13812" align="alignnone" width="500"] 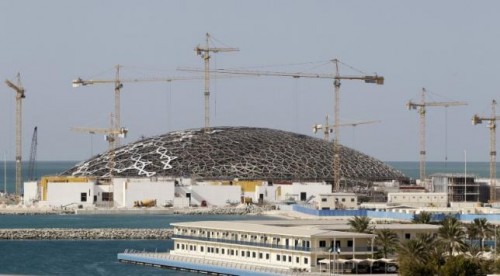 Sultan al Qassemi, patron of Arab Art and founder of the Sharjah based Barjeel Art Foundation, describes his personal art collection to guests in his home in Dubai December 9, 2014. Reuters[/caption] Sharjah's Barjeel Art Foundation, for instance, shows Middle Eastern and Arab art from the private collection of Sultan al-Qassemi, an art enthusiast and member of the ruling family, as well as regularly rotating temporary exhibitions. "Sharjah has the most sincere interest in the arts," said de Boer. "They are motivated by art for art's sake." - Reuters