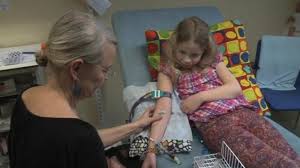 SWEDEN - Doctors may be able to detect type 1 diabetes in children before they exhibit any symptoms of the disease, new research from Sweden shows. Type 1 diabetes is an autoimmune disease that often appears in childhood and is the result of the body being unable to produce the hormone insulin. Scientists taking part in The Environmental Determinants of Diabetes in the Young (TEDDY) project have discovered four markers, or autoantibodies, in the blood of the study's participants that make it possible to detect the disease earlier, meaning that treatment can also start earlier. Type 1 diabetes occurs when beta cells in the pancreas are destroyed by the autoantibodies. Once the beta cells are destroyed, the body can no longer produce insulin and cannot regulate blood sugar. Lead researcher Ake Lernmark, from Sweden's Lund University, says that measuring the levels of autoantibdodies in children's blood indicates whether their immune system has started to attack beta cells. He says the autoantibodies appear years before the disease is usually diagnosed. "So the TEDDY study has discovered that the appearance of autoantibodies against insulin producing cells, appear during the first years of life, but the disease is not diagnosed until some ten years later So that's the discovery. We now know where to look for the trigger so we have to explain why this auto anti-bodies develop and now we know that we should look during the first years of life," Lernmark told Reuters The TEDDY study, which is funded by the US National Institutes of Health (NIH), involves 8,600 children - with an increased hereditary risk of type 1 diabetes - from Sweden, the United States, Germany and Finland. Lernmark's work has revealed triggers of type 1 diabetes in children at a much earlier stage than was previously possible. The team now wants to test all four-year-old children in Sweden. "For the first time it will allow the researchers to look, to study, the mechanisms that trigger this disease because in the past we didn't know when to look. So if you take a newly diagnosed child and you ask the question what happened to that child a month before diagnosis, or one year before diagnosis - we already missed the point and the point is that we have to look for the trigger during the first years of life, not in conjunction with the diagnosis of diabetes - it's too late," he said. The new discovery could lead to earlier treatment and lower doses of insulin used to treat the condition. It may even be possible for sufferers to postpone or avoid symptoms as the disease develops. Fredrik Nicklasson's children have been taking part in the study since birth. He has to keep regular and detailed food diaries for his son and two daughters, while they have to submit blood, stool and nail samples, as well as information about illnesses and medication. Nicklasson said the children did not mind the regular checks, as it didn't feel like a hospital but more like play-school or a day-care center. "Well, I think they think it's quite fun - most of the time - because it also involves some blood sampling but in our family that hasn't been a big issue," he said. Cornelia and Hedvig Nicklasson are used to the drill. "She usually asks some questions... about what I eat, what I do and then I'm measured to see how tall I am and how much I weigh compared to last time and then they take a blood sample," Cornelia said. "They take a blood sample, weigh and measure me and I've had to answer some questions," said Hedvig. It is still not known what causes the immune system to start attacking the body's own insulin cells to start off with. One theory is that a virus could be the trigger. There is no cure for type 1 diabetes at the moment, but Lernmark said a long term goal would be to find a vaccine. "So let's assume, or hypothesize that there is a virus being responsible for triggering these autoantibodies, the goal is then to make a vaccine against that virus and if that would be the discovery then the chances to prevent type-1 diabetes altogether is very high," he said. The study involves collaboration between leading researchers in genetics, protein chemistry and metabolism to find out what triggers the autoantibodies. - Reuters