Deutsche Bank to fight $14 billion demand from US authorities 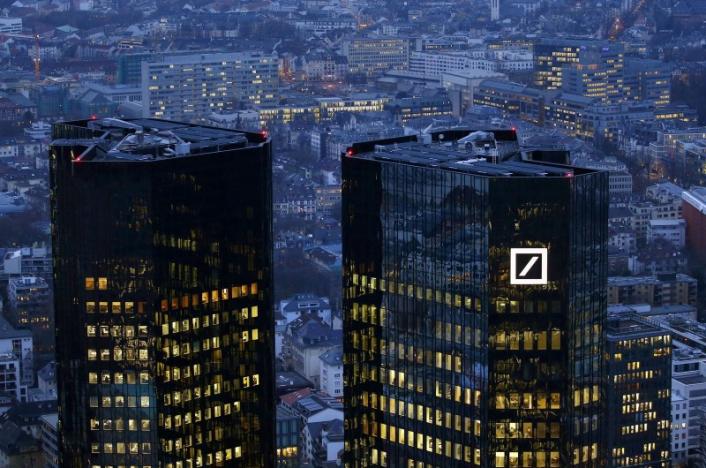 Deutsche Bank to fight $14 billion demand from US authorities

FRANKFURT – Deutsche Bank (DBKGn.DE) said it would fight a $14 billion (11 billion pound) demand from the U.S. Department of Justice to settle claims it missold mortgage-backed securities, a shock bill that raises questions about the future of Germany's largest lender.
The claim against Deutsche, which is likely to trigger several months of talks, far exceeds the bank's expectations that the DoJ would be looking for a figure of only up to 3 billion euros ($3.4 billion). The demand adds to the problems facing Deutsche Bank's Chief Executive John Cryan, a Briton who has been in the job for a year. The bank only scraped through European stress tests in July and has warned it may need deeper cost cuts to turn itself around after revenue fell sharply in the second quarter due to challenging markets and low interest rates. Deutsche Bank shares, which have lost around half their value this year, tumbled 7.6 percent to 12.10 euros in Frankfurt on Friday, with analysts saying the bank may need to raise fresh funds from investors or sell assets to shore up its capital ratios. The cost of insuring Deutsche Bank debt against default rose by around eight percent. The bank, which employs around 100,000 people, said it regarded the DoJ demand as an opening shot. "Deutsche Bank has no intent to settle these potential civil claims anywhere near the number cited," it said in a statement. "The negotiations are only just beginning. The bank expects that they will lead to an outcome similar to those of peer banks which have settled at materially lower amounts." Analysts said that even a hefty reduction in the bill was likely to weigh heavily on Deutsche Bank's finances. "If the final bill is at 5 billion euros or more Deutsche Bank will not be able to avoid a capital hike anymore," said Ingo Frommen, banking analyst at LBBW. Deutsche Bank's problems are likely to alarm political leaders in Europe's largest economy and the home to the European Central Bank. The German finance ministry said on Friday that the government expected a "fair result" from the negotiations but that the talks were a matter for the bank and the American authorities. Finance minister Wolfgang Schaeuble took the unusual step of voicing public support for the bank earlier this year and a senior opposition figure said he expected the government to step in as a last resort if needed. "The question would be how much damage would it do to the economy if the bank were to topple," said Green Party financial spokesman Gerhard Schick. The DoJ has taken a tough stance in settlement negotiations with other banks, requesting sums higher than the eventual fine. A recent European Union ruling that Apple (AAPL.O) must pay up to 13 billion euros in taxes to the Irish government and the forthcoming U.S. election could complicate Deutsche Bank's efforts to whittle down the demand. One of Deutsche's top 10 investors said he expected the bank to have to pay 4-5.5 billion euros for the mortgages case. "But because of the election campaign it may end up higher - at maybe 6 or 7 billion." In 2014, the DoJ asked Citigroup (C.N) to pay $12 billion to resolve an investigation into the sale of shoddy mortgage-backed securities, sources said. The fine eventually came in at $7 billion. In a similar case, rival Goldman Sachs (GS.N) agreed in April to pay $5.06 billion to settle claims that it misled mortgage bond investors during the financial crisis. Deutsche Bank's settlement will comprise a different list of recipients from the Goldman case, a source close to the matter said, adding that the lender had already settled some claims three years ago. In late 2013, Deutsche Bank agreed to pay $1.9 billion to settle claims that it defrauded U.S. government-controlled Fannie Mae and Freddie Mac, America's biggest providers of housing finance, into buying $14.2 billion in mortgage-backed securities before the 2008 financial crisis. –Reuters