Diabetes testing in symptomless adults may not lower risk of death 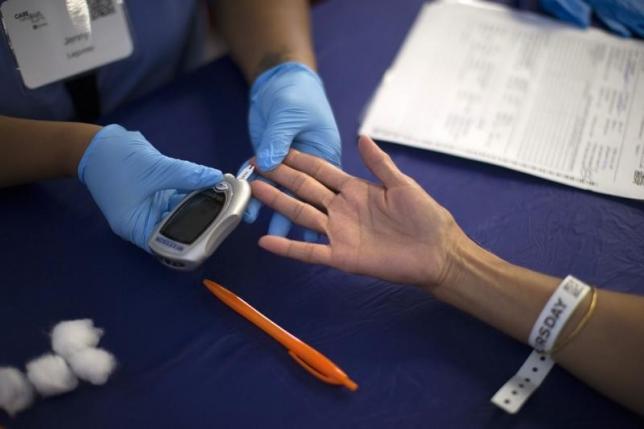 Diabetes testing in symptomless adults may not lower risk of death

CHICAGO - Expanding diabetes screening in adults to catch the disease early does not appear to keep people from dying of cardiovascular causes, according to a report designed to help shape US treatment guidelines. Earlier detection did seem to slow the progression of so-called prediabetes to full-blown diabetes, but it had no impact on the risk of death from heart or blood vessel disease 10 years later, researchers found when they analyzed studies conducted from 2007 to 2014. In 2008, the US Preventive Services Task Force recommended testing for diabetes before symptoms emerge in an effort to get millions of undiagnosed adults on medications to lower blood sugar, cholesterol and blood pressure before the disease worsens and complications become harder to treat. "Many people with early diabetes may not have symptoms, and thus do not seek care," lead study author Dr. Shelley Selph of Oregon Health and Science University said by email. "It is possible that 10 years of follow-up is insufficient to detect a mortality benefit." About 21 million Americans were diagnosed with diabetes in 2010, and an estimated 8 million more were undiagnosed, the researchers note in Annals of Internal Medicine. Most of them have type 2 diabetes, which is linked to obesity and advanced age and happens when the body can't properly use or make enough of the hormone insulin to convert blood sugar into energy. Diabetes is the leading cause of kidney failure, non-traumatic lower limb amputations, and blindness. It’s also a major cause of heart disease and stroke and the seventh-leading cause of death in the US, the authors note. Like obesity, hypertension is a risk factor for diabetes, and this link prompted the expansion of US screening guidelines to include people with high blood pressure. In two trials examined in the report, one of which focused on people at greater risk for diabetes, the risk of death after 10 years was similar whether people were screened or not. This might be due to not enough people getting screened, or improved management of cardiovascular disease contributing to lower mortality, the researchers note. There's little harm to screening, though, beyond the potential for short-term anxiety for those who test positive for diabetes, the report authors wrote. For people with pre-diabetes, with high blood sugar levels but not full-blown disease, both medications and lifestyle changes appear effective at delaying progression of the disease, the researchers said. The preventive services task force is in the process of updating its diabetes screening guidelines, Dr. Michael Pigone, a task force member, said by email. The group is focusing on "the effectiveness of identifying abnormal blood sugar before it progresses to diabetes, as well as the effectiveness of treating those who have abnormal blood sugar with intensive lifestyle intervention." The current report confirms more data is still needed, said Dr. Betul Hatipoglu, an endocrinologist at Cleveland Clinic in Ohio, in an email. "It acknowledges that prevention of diabetes is possible. It would really be a disservice to the population at risk to not give them their second chance to know and prevent diabetes until we can prove that we are not helping but actually harming them by early intervention, which will be impossible in my opinion." The study was funded by the Agency for Healthcare Research and Quality and done in consultation with the US Preventive Services Task Force. - Reuters