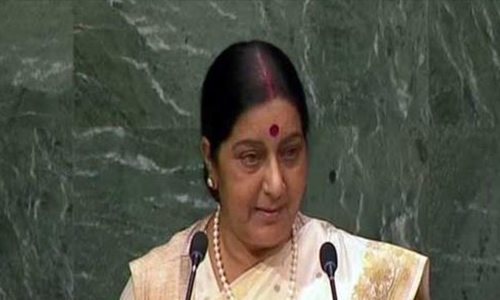 NEW YORK – Indian External Affairs Minister Sushma Swaraj has said that dialogues and terrorism cannot go side by side, reported 92 News. Addressing the United Nations Security Council on Thursday, she said that they wanted a meeting of advisers of the Security Council. She said that Pakistan and India could not tolerate terrorism. “India has been facing terrorism for last 25 years. New York also faced terrorism,” she said. She said that there should be no distinction between good and bad terrorists. “Terrorists have no religion. International terrorism can only be eliminated through an international action,” she said. The minister said that India wants to resolve all issues through dialogues with Pakistan. “Prime Minister Nawaz Sharif presented four proposals yesterday. We say only one proposal is enough. We propose to leave terrorism and start talks,” she added.