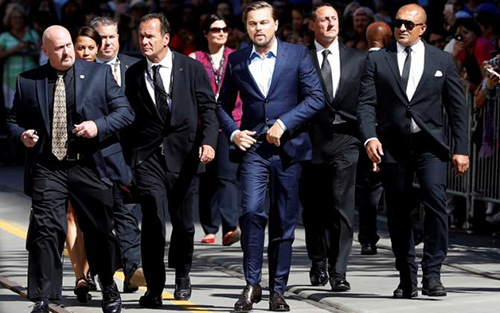 TORONTO – Hollywood heartthrob and environmental activist Leonardo DiCaprio said he rushed to release his upcoming climate change documentary "Before the Flood" ahead of November's US presidential elections to issue a clarion call to US voters in time to influence their decisions. "We wanted this film to come out before the next election because ... the United States is the largest contributor to this issue," DiCaprio said to the audience after the film's world premiere at the Toronto International Film Festival on Friday. "We cannot afford, at this critical moment in time, to have leaders in office that do not believe in the modern science of climate change," he added. The film follows the Oscar-winning DiCaprio and actor-filmmaker Fisher Stevens as they travel from Canada's oil sands to tiny Pacific islands, interviewing world leaders such as the Catholic Church's Pope Francis and US President Barack Obama, climate scientists and academics. DiCaprio's interview subjects discuss and document the negative impacts of industrialization and increasing consumption on the health of the planet. "The fact that we are still debating any of this is just utter insanity to me," DiCaprio said. The actor, who won an Oscar this year for playing a fur trapper battling nature's elements in "The Revenant," was an executive producer on 2014 Oscar-nominated documentary "Virunga," about the threatened gorillas in the Democratic Republic of Congo. This year, he is an executive producer on Netflix documentary "The Ivory Game," about Africa's illegal ivory trade, also making its debut at the Toronto film festival. "Before the Flood" is out in New York and Los Angeles theaters on Oct. 21 and airs on National Geographic Channel globally on Oct. 30. The film calls out the sizable minority of Republican lawmakers who flatly deny the broad scientific evidence that human activity is causing environmental damage, and names presidential candidate Donald Trump and former candidates Marco Rubio and Ted Cruz. It seeks to effect a balance between making clear that the earth is facing a massive danger while also offering audiences a glimmer of hope that catastrophe can be averted. The gloom came from DiCaprio and the hope from Stevens, the pair said in the question and answer session that followed the screening. The film also criticizes those who fund anti-environment groups for commercial gain. "The Koch brothers aren't denying it, they just want to make money," Stevens said, referring to Charles and David Koch who have founded and funded conservative and libertarian political organizations. –Reuters