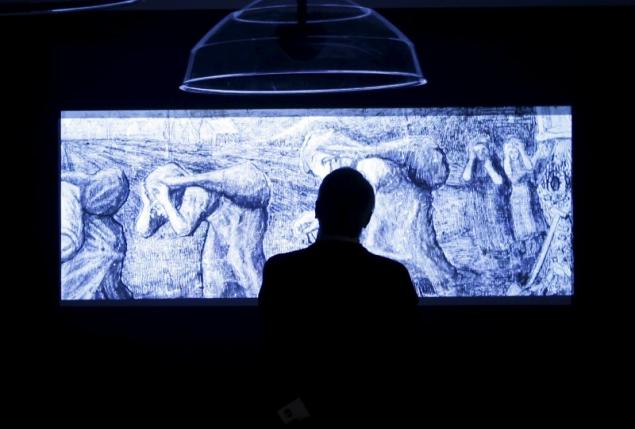 MONS, BELGIUM - It is fitting tribute to the role the Belgian coalfield around Mons played in Van Gogh's emergence as an artist that the city has made a rare show of his early works a focus of its year as European Capital of Culture. From the clumsy sketches with which the 25-year-old Dutch lay preacher began to drawings flowing with the energy that marked his later painting, "Van Gogh in the Borinage: Birth of an Artist" at Beaux Arts Mons is a treat for the academic and casually curious alike. It ought, too, to inspire perseverance in any would-be creator -- even Van Gogh started out with dross. "I can see it is not any good yet," Vincent wrote to his art dealer elder brother Theo Van Gogh in a letter accompanying two small pencil drawings showing the weary lives of the miners of the Borinage coalfield among whom he lived from 1878 to 1880. "But," he added, "It is starting to come." Alongside letters scratched out from the colliers' cottages where the well-born Van Gogh lodged, the show traces progression in technique, in pencil and paint. Largely early work, it does culminate in the sumptuous, sunlit Impressionism of "Street in Auvers-sur-Oise", painted in the weeks before his death aged 37. Van Gogh drew the pitheads, the simple homes, the miners' potato patches, even, after an underground visit, the coalface itself. In the grip of the youthful religiosity that later gave way to suicidal despair, he wrote: "Those who work in the shadows, in the belly of the earth, like the miners deep in the black coalworkings, are very touched by the word of the Gospel." Also on display are works by others who inspired him as well as versions he made of them, notably Jean-Francois Millet's paintings of peasant life such as "The Sower" and "The Angelus". From hesitant copyist to inspired original, the Van Gogh at Mons labors as hard as those he saw around him in the Borinage. In a final touch to encourage today's amateur, the last room shows how he returned in his last months to studying the human form from a bestselling textbook of his day. Hung next to the clean Classical lines of the printed models, Van Gogh's figures are no accurate copies. Yet they leap from the wall with life. FLEMISH PRINTS The exhibition in the neat modern BAM gallery just off Mons' florid Renaissance town square, an hour south of Brussels, has packed in 100,000 visitors since January. It will open extended hours for its last six weeks once the city celebrates its year in the European eye by opening five new museums on April 3. Next Sunday, for Easter, entry to the Van Gogh is free. There is a wealth of art, architecture and history to take in around Mons, including new exhibitions on the city's place in the two world wars. But as a complement to the Van Gogh, contemporary Flemish master Luc Tuymans' print show in the nearby ex-mining town of La Louviere is thought-provoking. Best known for his paintings, often exploring troubling histories and based on photographs and other printed images, "Luc Tuymans: Suspended" offers 25 years of his collaboration with printmakers to create fluid, layered, intriguing effects. "The Temple" consists of etchings of watercolors of Polaroids of watercolors of Polaroids of a TV screen showing a documentary about Mormons. For all the lost levels of clarity, they still convey a clear sense of each image to the human eye. Van Gogh, battling in the Borinage to command his pencil and paintbrush to extract an essence of life, would have understood. - Reuters