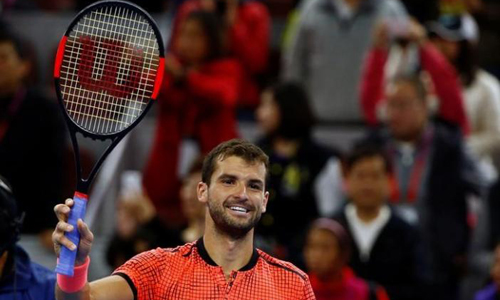 BIEJING- Bulgarian's Grigor Dimitrov claimed a first career win over former world number one Rafael Nadal at the eighth time of asking to reach the semi-finals of the China Open on Friday. Dimitrov, ranked 20th in the world, knocked out the second seed 6-2 6-4 to set up a clash with Canada's Milos Raonic. Top seed Andy Murray faced some stern resistance against fellow Briton Kyle Edmund before winning 7-6(9) 6-2. Edmund's barrage of heavy forehands worried Murray in the opening set and the world number two trailed 2-5 in the tiebreak and had to save a set point before converting his fifth. Despite Edmund breaking early in the second set, Murray raised his level to win six games in a row. "He (Edmund) made it very tough for me. He's improving at a solid pace now... If he keeps going on the path he's on just now, he'll be up at the top of the game very soon," Murray, a three-times grand slam winner, told reporters. Murray will face fifth seed David Ferrer in the semis after the Spaniard beat in-form 19-year-old Alexander Zverev 6-7(4) 6-1 7-5 in two hours and 21 minutes. "Every match against him, he certainly makes you earn it. There's not many short points against him," Murray said of his next challenge. Dimitrov, bidding to reach his third final of the year after a return to form, capitalized on Nadal's low first serve percentage to claim the opening set comfortably. Nadal was far tougher in the second set but Dimitrov held his nerve to beat the 30-year-old Spaniard. "It's obvious that Grigor played much better than me and he deserved to win," Nadal said of a match that began with five consecutive service breaks. "I fought until the last ball, but was going against psychologically bad feelings because I was suffering with my serve. When that happens, you have to go to the next tournament because you don't deserve to win like this." Nadal will move on to Shanghai. Due to Thursday's rain in Beijing, the big-serving Raonic was forced to play twice, beating Tunisia's Malek Jaziri 6-3 6-4 and Spain's Pablo Carreno Busta 6-4 6-4 to advance. -Reuters