Dinner with TV may be a recipe for less healthy meals 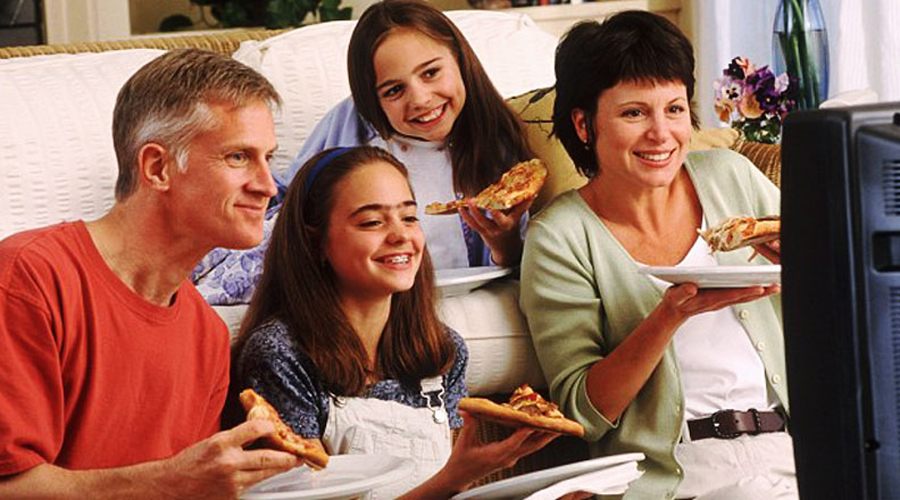 Dinner with TV may be a recipe for less healthy meals

NEW YORK – Families that eat dinner with the TV on tend to eat less healthy food and to enjoy the meals less than families who leave the TV off, according to a recent U.S. study. This was true even for families that were not paying attention to the TV and only had it on as background noise, the researchers write in the journal Appetite. “Family meals are protective for many aspects of child health,” lead author Amanda Trofholz said by email, adding that parents can take this time to check in with children and teach them about setting limits on their diets. “Having the TV on during the family meal may reduce the opportunity for this connection between family members and blunt the protective effects of the meal,” said Trofholz, a researcher at the University of Minnesota, Minneapolis. To explore the link between TV watching during meals and risk factors for childhood obesity, the study team analyzed video recordings of 120 families that included a child aged 6 to 12. The families were recruited from primary care clinics in Minneapolis between 2012 and 2013 and were mostly from low-income and minority groups. The families recorded two of their family meals using an iPad and reported to the research team what they had eaten and how much they had enjoyed it. The study team assessed the health of the meals themselves, whether a TV was being used and the emotional atmosphere of the meal. Only one third of the families left the TV off during both recorded meals. About a quarter had the TV on for only one meal and 43 percent left the TV on during both meals. Of the families eating with the TV on, two thirds paid attention to the TV while the other third only had it on in the background. Families who ate with no TV playing or with the TV on during only one meal enjoyed their meals more than those that watched during both meals. This was true regardless of whether families paid attention to the TV. Families that didn’t watch TV during meals ate significantly healthier food than the others. Families that had the TV on but did not pay attention also ate more healthy food than families that actively watched TV while eating. Families eating with the TV on also ate fast food for dinner significantly more often than those with TV-free meals. Children of TV-watching families were not more likely to be overweight or obese than children whose families did not watch TV during meals, however. “A non-distracted meal environment, without the TV on, is an opportunity for children to enjoy eating, try novel foods and self-regulate eating when healthy options are provided,” said Eileen FitzPatrick, an assistant professor at The Sage Colleges in Troy, New York. “Having the TV on during dinner is a distraction which may lead to ‘mindless eating’ including overeating without realizing it,” FitzPatrick, who was not involved in the study, said by email. FitzPatrick added that advertisements on TV market unhealthy foods to children and can shape what foods they prefer to eat for dinner. Families should try to view the family meal as a family event rather than just a necessity, Trofholz said. “Families who see the family meal as a time to connect with and enjoy their families may be more likely to turn off the TV, have a higher quality meal, and enjoy the meal more.” –Reuters