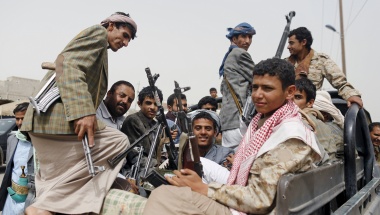 ADEN – Saudi Arabia's navy evacuated dozens of diplomats from Yemen and the United Nations pulled out international staff on Saturday after a third night of Saudi-led air strikes trying to stem advances by Iranian-allied Houthi fighters. Residents reported heavy clashes between the Houthis and mainly Sunni tribal fighters in the south of the country, while the Saudi-led air campaign sought to stall a fresh offensive by the Shi'ite Muslim group on Aden from the east. Riyadh's intervention, a surprise move from a conservative monarchy better known for flexing its muscle in oil markets than through military might, is planned to last a month but could extend for five or six, a Gulf diplomatic source said. Dozens of diplomats were shipped out of Aden to the Red Sea port of Jeddah, Saudi television said, escaping the city where President Abd-Rabbu Mansour Hadi had taken refuge until Thursday, when he left for Egypt to shore up Arab support for his crumbling authority. The director general of Yemen's Health Ministry, al-Khadher Laswar, said more than 62 people had been killed and 452 wounded in the city since Wednesday. Explosions at the city's largest ammunition depot on Saturday left at least nine badly wounded, he said. In the capital Sanaa, which has been under Houthi control since September, more than 100 UN staff were evacuated, a United Nations source said. Airport staff said dozens of other foreigners working for international oil companies and NGOs also flew out to Ethiopia and Djibouti. On Friday, the Houthis and allied army units gained their first foothold on Yemen's Arabian Sea coast by seizing Shaqra, 100 km (60 miles) east of Aden, allowing them to open a new front to march on the south's main city. "IRAN'S PUPPET" At the Arab summit in the Egyptian resort of Sharm el-Sheikh, Hadi urged Yemen's army to protect state institutions and obey the orders of Yemen's "legitimate leadership". He also underlined the regional dimensions of the conflict, calling the Houthis "Iran's puppet". Saudi Arabia's King Salman told the summit the operation would continue until Yemen achieved peace and security, while Kuwait's emir, Sheikh Sabah al-Ahmad al-Sabah, said the Houthi advances "pose a threat to our security". Alaeddin Boroujerdi, head of the Iranian parliament's national security and foreign policy committee, added to the sense of confrontation, saying: "Saudi Arabia is too small to be able to threaten Iran." "We utterly condemn Saudi Arabia's attack on Yemen and it will end in failure," he was quoted as saying by the semi-official Tasnim news agency. A Gulf diplomatic source, speaking on condition of anonymity, said the Arab alliance initially planned a month-long campaign, but it could last up to six months. He said Iran was likely to retaliate indirectly, by encouraging pro-Iranian Shi'ite activists to carry out armed attacks in Bahrain, Lebanon and eastern Saudi Arabia. SCUD MISSILES The official said Gulf Arab concern had been heightened in January by satellite imagery showing Houthis repositioning Scud missiles in northern districts near the Saudi border, aimed at Saudi territory. He said Yemen's military had about 300 Scuds, the bulk of them believed to be in the hands of the Houthis and allied military units loyal to former president Ali Abdullah Saleh, and that the campaign so far had destroyed 21 of them. Yemen, by far the poorest country on the Arabian peninsula, has struggled to regain stability since mass protests in 2011 that eventually unseated Saleh after 33 years in power. Hadi led a UN- and Gulf-backed national dialogue that was discussing a new constitution when the Houthis took the capital and pushed him aside. The Gulf official said the aim of the Saudi-led intervention was to restore that process, and that the Houthis could have a role in it. In a week of intense fighting, the Houthis have taken the Red Sea port of al-Mukha to Aden's northwest, and the city's northern outskirts. Their entry into Shaqra means they control most land routes to Aden and can block tribal fighters trying to come in to reinforce Hadi's troops. The medical relief organization Medecins Sans Frontieres said doctors at its hospital in Aden, who had received at least 250 wounded people in the last week, were struggling to cope. "On Thursday alone, we received 87 injured. It was tragic," said Hani Isleem, a manager at the hospital. "We were working in difficult conditions and all the time ducking out heads so that we were not hit by the shooting we were constantly hearing outside." –Reuters