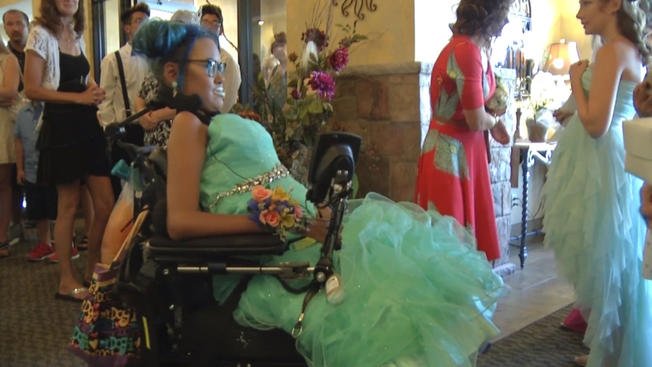 CHICAGO - Disability rights groups said they have asked child protective services to intervene in the case of a severely disabled Wisconsin teenager who suffers chronic pain from her disease and wants to die. Jerika Bolen, 14, who suffers from Type 2 Spinal Muscular Atrophy, garnered widespread attention earlier this year by speaking openly about plans to end her life. Her final wish of a prom dance drew hundreds in her hometown of Appleton, Wisconsin. Bolen told local media that due to her severe pain and the degenerative nature of her disease, which has confined her to a wheelchair, she would stop using the ventilator that aids her breathing in September. Bolen's mother, Jen, could not be reached to comment on Thursday, but she told the Appleton Post Crescent in July she had reluctantly accepted her daughter's decision to end her life. "If she's at peace with it, I have to find a way to make peace with it," she told the newspaper. However, several disability rights groups have voiced concern, arguing that Bolen's case should be treated as one of suicide prevention because her disease is not terminal. They also question the pain management care Bolen has received. "This is a child protection issue," Carrie Ann Lucas, founder of Colorado-based Disabled Parents Rights, told Reuters on Thursday. Lucas reported Bolen's case last month to the Outagamie County Children, Youth and Families Division. The office did not respond to a request for comment. In an August letter to Wisconsin's Department of Children and Families signed by four disability rights groups, Lucas said severe pain is not a reason to support suicide and advocated proper medical and health care for Bolen. "Ms. Bolen is clearly suicidal. This teenager deserves intervention, rather than assistance to end her life," the organizations said. State officials could not confirm if the family is involved in an investigation. "The fact that she is severely disabled is not a reason to accept her suicide. She deserves the same suicide prevention as of any other teenager," Diane Coleman, president of Not Dead Yet, who signed Lucas' letter, told Reuters. A second complaint to Outagamie County was sent by Disability Rights Wisconsin last month, according to Lisa Pugh, the group's public policy director. She said Bolen is a minor and cannot decide to end her own life. -Reuters