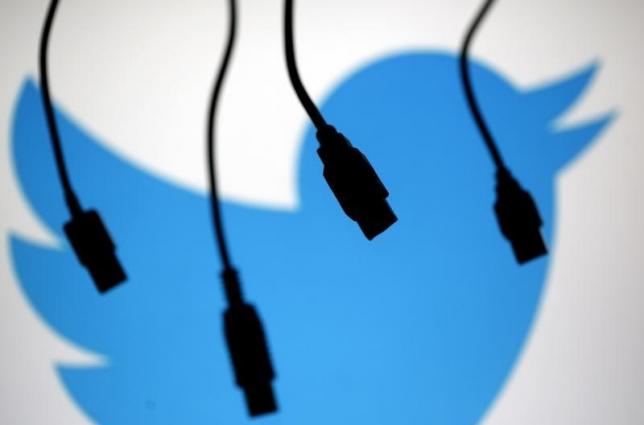 SAN FRANCISCO - Twitter Inc disappointed investors yet again with second-quarter earnings that missed estimates and a lower-than-expected outlook, reviving chatter about a possible sale of the company and the future of Chief Executive Officer Jack Dorsey. With the stock falling almost 15 percent Wednesday, Twitter shares are down 50 percent since Dorsey returned last summer to the helm of the social media company he co-founded. Twitter continues to show almost no growth in its user base of a little over 300 million, an ominous sign, and advertising revenues are showing surprising softness; the company cuts its forward revenue estimate for the next quarter to $590 million- $610 million, while analysts had been expecting $681 million. At a market cap of about $11 billon, compared with more than $40 billion at its peak, Twitter could now be a more attractive takeover target. CNBC commentator Jim Cramer, for one, suggested that Twitter could be rolled into the combined Yahoo-AOL. Verizon, which owns AOL, this week said it would buy Yahoo (YHOO.O) for $4.8 billion. Google (GOOGL.O), Disney (DIS.N) and Apple (AAPL.O) have also been mentioned as possible acquirers of Twitter over the years. Twitter surged briefly earlier this month after Microsoft (MSFT.O) announced its acquisition of LinkedIn, as investors hoped for a similar deal for Twitter. Still, a person close to the board said it was highly unlikely that there would be any move to oust Dorsey or actively seek a sale of the company anytime soon. Dorsey also serves as CEO of payment company Square, a dual role that many have questioned. The live-streaming video deals with the major sports leagues that Dorsey and his executive team touted in an investor call Tuesday could add to the company's appeal, said James Cakmak, analyst at Monness, Crespi, Hardt & Co. "The good news is these content deals could potentially make (Twitter) a more attractive acquisition target for a media company looking to expand digital distribution," he said. Twitter has struggled to translate its high public profile into the kind of user growth that has propelled Facebook (FB.O), which now boasts 1.71 billion customers. The company has also suffered from management turmoil since its earliest days; former CEO Dick Costolo, who was credited with quickly building the company's advertising operations, resigned under pressure last June. Twitter's board of directors has been reconstituted under Dorsey, with the addition of former Google executive Omid Kordestani as executive chairman and new members including former Facebook CTO Bret Taylor, U.K. internet entrepreneur Martha Lane Fox and BET Networks chair Debra Lee. Dorsey outlined a turnaround plan earlier this year to focus on five areas: Twitter's core service, live-streaming video, nurturing the site's "creators and influencers," creating an environment in which users feel safe and building better relations with third-party developers. Some analysts say Dorsey needs more time to reap the benefits of his turnaround plan, but patience is waning. Robert Peck, analyst at SunTrust, pointed to several big concerns: lack of any uptick in user numbers or engagement, faltering ad sales, and questions about the company's competitiveness in live video given rival initiatives by Facebook and Alphabet Inc's YouTube. When analysts asked Dorsey on Tuesday the value in remaining an independent company, he said that "there's so much farther for us to go" as a company and business of importance. "I have a lot of confidence in our ability and that our five priorities are the right ones," he said. -Reuters