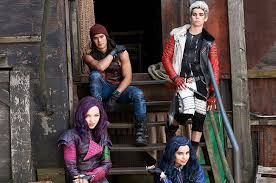 NEW YORK - The soundtrack from the Disney Channel TV movie "Descendants" topped the Billboard 200 chart this week, as Taylor Swift and British singer-songwriter Ed Sheeran strengthened their dominance in album sales this year. "Descendants," a fantasy film about the teen offspring of some of Disney's best-known animated villains, sold almost 42,000 units in its first week of release, according to figures from Nielsen SoundScan. Disney Channel is a cable television unit of Walt Disney Co . The Billboard 200 chart tallies album sales, song sales (10 songs equal one album) and streaming activity (1,500 streams equal one album). In a soft week for new releases, Swift's best-selling album of 2014, "1989" rose to the No. 3 spot, with sales of 34,800 units, after 40 weeks on the chart. Sheeran's "X" notched its 58th week on the Billboard 200 and rose to fourth place. Just two new albums made their debut in the Top 10 - rockers Led Zeppelin's newly re-issued 1979 hit "In Through the Out Door" in the No. 9 spot, and comedian Lil Dicky's "Professional Rapper," which entered the chart in seventh place. Last week's chart-topper, R&B artist Jill Scott's "Woman," slipped to fifth place. On the Digital Songs chart, which tallies digital single downloads, British boy band One Direction's "Drag me Down" took the top spot with some 350,000 downloads, followed by "Can't Feel My Face" by Canadian R&B artist The Weekend. - Reuters