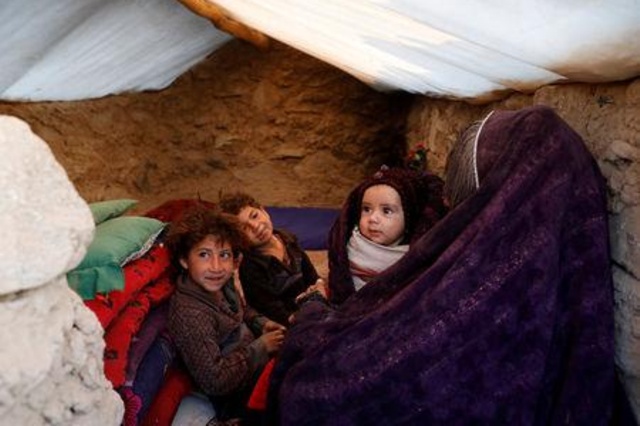 HERAT, Afghanistan (Reuters) - Mahiuddin, a 35 year-old farmer from Badghis, a mountainous province in western Afghanistan, has been living in a camp outside the city of Herat for months, one of tens of thousands displaced by the worst drought the country has seen in years. For all the billions of dollars spent since the Taliban were ousted in 2001, Afghanistan remains a desperately poor country, lacking basic infrastructure, including electricity and paved roads across most of its territory. Struggling after decades of war, Afghanistan is now facing an acute food shortage in many regions, with 2.6 million people enduring emergency-level food insecurity, one stage short of outright famine, according to the U.N. Food and Agriculture Organization. With his crops failing and his animals dying of thirst, Mahiuddin left Kolari village, in an area under Taliban control, for the more stable province of Herat, joining some 223,000 people displaced in western Afghanistan. “We were forced to leave our home due to drought. We had no food to eat and no water to drink,” Mahiuddin said. “We have lost everything and if we go back to Badghis, what should we do there, since everything is lost?” The exodus underlines the deep environmental problems facing Afghanistan, much of which consists of dry, rugged and inhospitable terrain subject at various times to both drought and deadly flash floods made worse by deforestation. International aid groups say that without urgent help, 10.6 million people, more than a quarter of Afghanistan’s population, could be “food insecure” by next year, with 2.9 million facing emergency-level insecurity. With much of Afghanistan’s agricultural land degraded, and many areas lawless after years of war, food insecurity has added to the suffering without generating the same headlines as the fighting. Although Herat is one of Afghanistan’s more prosperous cities, it cannot provide work for the tens of thousands of new arrivals and its infrastructure is under increasing strain, officials say. “Drinking water will be a problem next year if the situation does not improve,” said Herat governor Mohammad Asif Rahimi. “Herat cannot deal with 50,000 families coming next year.”

Aid groups provide emergency assistance of 6,000 afghani($80) for immediate needs as well as help with cooking equipment, tents, tarpaulins and fuel but the thousands camped out in settlements are looking forward with apprehension to the harsh winter months ahead. “The tent is so cold and I have two small children,” said Abdul Wakil from the northern province of Faryab, who arrived four months ago at a camp outside Herat. “I turn to one side to warm up and then turn to warm the other.” Already the U.N. Office for the Coordination of Humanitarian Affairs (OCHA) has reported the first deaths among displaced children because of the cold in Herat and Badghis. Officials say relief efforts have been hampered by a lack of coordination between central and local government and aid organisations, with displaced people spread out over 10 main camps and dozens of smaller settlements around Herat. “A lot of people have been displaced and all of them are needy,” said Ahmad Jawid Nadem, head of the local department of refugees and repatriation, who said resources had been badly strained by the thousands of arrivals. “Our food stocks are empty and we have asked the central government to provide us assistance. Once we receive help from central government, we will distribute food to displaced people,” he said.