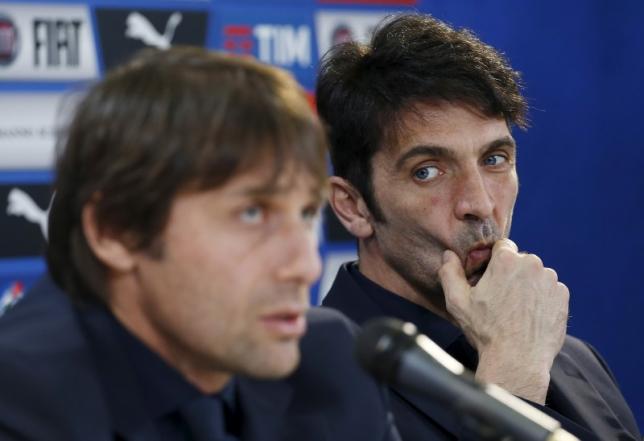 ROME: Italy coach Antonio Conte goes into the European Championship with questions hanging over his team after injuries disrupted his selection plans and a lack of punch was exposed up front. Adding to the frustrations of only occasional get-togethers with his players has been the distraction of his impending move back to club football with Chelsea. However, the former Juventus coach was relieved to be cleared of any role in a 2011 match-fixing scandal while in charge of Serie B side Siena a month before the tournament's June 10 kickoff. The passionate Conte showed his frustration with managing a national team when he graphically described his displeasure with the long spells “in the garage” and far from the track. That will not lessen his desire to bow out in glory in France and he has the tactical nous and motivational powers to succeed. "I'm very tired of spending so much time in the garage," he said before two March friendlies in which Italy drew 1-1 with European Championship holders Spain and were beaten 4-1 by World Cup winners Germany. "In the garage, I smelt the smell of the machine, or rubber and motor oil, not the grass of the pitch." Italy, who lost the Euro 2012 final to Spain in Kiev, were unbeaten in the qualifiers this time round thanks to a strong defence and a brilliant goalkeeper in captain Gianluigi Buffon. However, injuries have disrupted Conte’s midfield plans with Paris Saint-Germain’s Marco Verratti and Claudio Marchisio of Juventus both out of the tournament after injuries requiring surgery. He is sure to turn to PSG’s Thiago Motta, whose only appearances under Conte were in the two March friendlies, to fill the breach. Italy can field an impressive all-Juventus defence with Buffon in goal and Leonardo Bonucci, Giorgio Chiellini and even 2006 World Cup veteran Andrea Barzagli in the back line. Up front, Conte will be looking to talented little Napoli winger Lorenzo Insigne and striker Stephan El Shaarawy, who has spent the season at AS Roma on loan from AC Milan, for flair and goals. Italy open their Group E campaign on June 13 in Lyon against second-ranked Belgium, who beat Conte’s team in a friendly last year, and also face Ireland and Sweden. -Reuters