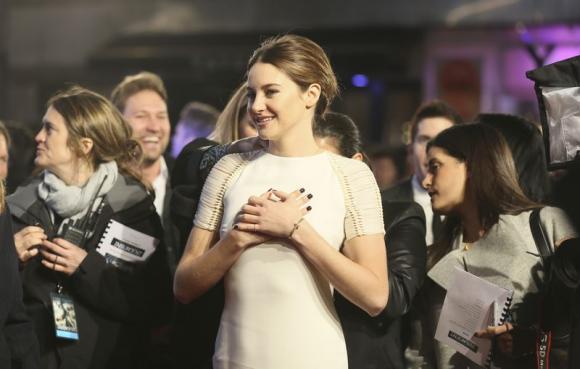 LOS ANGELES - With a new haircut and storyline, Shailene Woodley as "Divergent" heroine Tris Prior is hell-bent on revenge, battling the ghosts of her past in "Insurgent," the second film in the young adult sci-fi action film franchise. "Insurgent," out in US theaters on Friday, picks up where the first film in the dystopian series ended, with the genocide of Tris' parents and the people in her faction after she joins another community. Traumatized by the slaughter, Tris sets her mind on killing the calculating ruler Jeanine, played by Oscar-winning actress Kate Winslet ("The Reader"), who orchestrated the mass murder. "She's still struggling with the battles in her memories and demons and ghosts, that was something I really wanted to play on. It seemed like it was very dark psychologically," Woodley said about her character.' The "Divergent" series follows a post-apocalyptic world that has been divided into five factions, each defined by character traits: wisdom, honesty, selflessness, kindness and bravery. "Insurgent" diverges from the complex layered plot of the second book by American author Veronica Roth. In the new narrative, Tris must unlock a mysterious box to access a protected secret that can stop the war. The storyline allowed the film's stars such as Woodley to also take more liberties with their portrayals of the characters. "(Tris') psychological perspective from the book was very different from the movie, and so I did have to go on and create a Tris on my own," Woodley explained. "Divergent," the first of four films by LionsGate (LGF.N) to be made from Roth's trilogy, pulled in $288 million worldwide after its release in March last year. The second film is expected to make about $60 million in its opening weekend, slightly more than its predecessor. While the second book delved into Tris' relationship with her boyfriend Four, played by British actor Theo James, the film downplays the romance and puts the spotlight on the brutality of violence in the name of power. "It would be inappropriate to have them having tiffs or canoodling for hours while people are getting executed," said James. Miles Teller ("Whiplash") delivers the laughs in the film as Tris' nemesis Peter with light one-liners echoing the colloquial playfulness among teens. "In the first (movie) he became this comedic relief," Teller said. "I didn't know why they thought Peter was funny, but it's good to add some levity to it." - Reuters