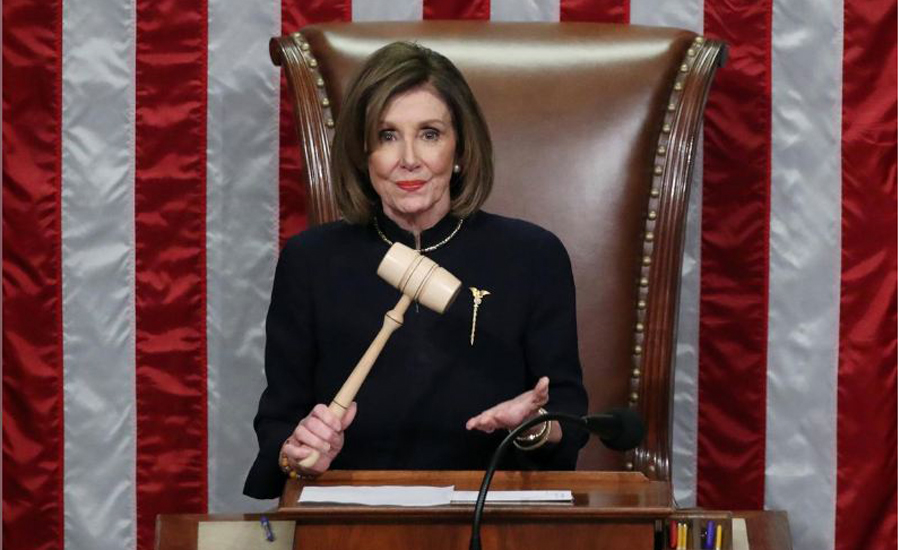 WASHINGTON (Reuters) – Donald Trump on Wednesday became the third US president to be impeached as the House of Representatives formally charged him with abuse of power and obstruction of Congress in a historic step that will inflame partisan tensions across a deeply divided America. The Democratic-led House’s passage of two articles of impeachment on a mostly party-line vote sets the stage for a trial next month in the Republican-controlled Senate - friendlier terrain for Trump - on whether to convict and remove him from office. No president in the 243-year history of the United States has been removed from office by impeachment. That would require a two-thirds majority in the 100-member Senate, meaning at least 20 Republicans would have to join Democrats in voting against Trump - and none have indicated they will. The Senate’s top Republican, Mitch McConnell, has predicted there is “no chance” his chamber will remove Trump when it holds its trial. House Speaker Nancy Pelosi said after the vote she would wait to name the House managers, or prosecutors, until she knew more about the procedures for the Senate trial. She did not specify when she would send the articles to the Senate. “So far, we haven’t seen anything that looks fair to us,” Pelosi told reporters. Trump, 73, is accused of abusing his power by pressuring Ukraine to investigate political rival Joe Biden, a leading contender for the 2020 Democratic presidential nomination, as well as a discredited theory that Democrats conspired with Ukraine to meddle in the 2016 election. Democrats said Trump held back $391 million in security aid intended to combat Russia-backed separatists and a coveted White House meeting for Ukrainian President Volodymyr Zelenskiy as leverage to coerce Kiev into interfering in the 2020 election by smearing Biden. The second article accused Trump of obstruction of Congress by directing administration officials and agencies not to comply with lawful House subpoenas for testimony and documents related to impeachment. Trump, who is seeking another four-year term in the November 2020 presidential election, has denied wrongdoing and called the impeachment inquiry launched by Pelosi in September a “witch hunt.” At a raucous rally for his re-election in Battle Creek, Michigan, as the House voted, Trump said the impeachment would be a “mark of shame” for Democrats and Pelosi, and cost them in the 2020 election. “This lawless, partisan impeachment is a political suicide march for the Democrat Party,” Trump said. “They’re the ones who should be impeached, every one of them.”

During a daylong debate before the vote, Pelosi read the US Pledge of Allegiance and said: “We are here to defend democracy for the people.” “If we do not act now, we would be derelict in our duty. It is tragic that the president’s reckless actions make impeachment necessary,” Pelosi said. As the debate unfolded, Republicans accused Democrats of seeking to use an unfair, rigged process to nullify the 2016 election and influence the 2020 vote. “The matter before the House today is based solely on a fundamental hatred of our president. It’s a sham, a witch hunt - and it’s tantamount to a coup against the duly elected president of the United States,” Republican Representative Mike Rogers said. Republican Representative Mike Kelly compared the impeachment to the Japanese attack on Hawaii’s Pearl Harbor in 1941, calling the House proceedings another “date that will live in infamy” - similar to the words Democratic President Franklin Roosevelt used to describe the raid that killed about 2,400 people and led to America’s entry into World War Two. The abuse of power article was passed on a 230-197 vote and the obstruction article was passed 229-198. All of the House Republicans opposed the articles, and two Democrats, Collin Peterson and Jeff Van Drew, voted no on both. Democrat Jared Golden voted against the obstruction charge but for abuse of power. “The only part of the vote that was bipartisan was in opposition. The President is just getting stronger while support for the Democrats’ political theater has faded,” Trump campaign manager Brad Parscale said in a statement. US Representative Tulsi Gabbard, a Democratic presidential candidate, voted present on both articles, declaring in a statement: “I could not in good conscience vote either yes or no.”

Trump’s election has polarized the United States, dividing families and friends and making it more difficult for politicians in Washington to find middle ground as they try to confront pressing challenges like the rise of China and climate change. The impeachment vote comes ahead of Trump’s re-election campaign, which will pit him against the winner among a field of Democratic contenders, including Biden, who have repeatedly criticized Trump’s conduct in office and promised to make it a key issue. “President Trump abused his power, violated his oath of office, and betrayed our nation,” Biden said on Twitter after the vote, adding: “In the United States of America, no one is above the law — not even the president.” Reuters/Ipsos polls show that while most Democrats want to see him impeached, most Republicans do not. Televised hearings last month that were meant to build public support for impeachment appear to have pushed the two sides further apart. The House vote on Wednesday was just the latest, but also unquestionably the biggest, in a string of controversies that have buffeted the turbulent presidency of the New York real estate mogul and former reality TV personality. Central to the impeachment inquiry was a July 25 telephone call in which Trump asked Zelenskiy to investigate Biden and his son Hunter Biden, who had joined the board of Ukrainian energy company Burisma while his father was U.S. vice president. Trump has accused the Bidens of corruption without offering evidence. They have denied wrongdoing. A rough transcript of the call released by the White House showed Trump asking Zelenskiy, elected only three months earlier and eager for American support, to “do us a favor” and conduct the investigations in coordination with his personal lawyer Rudy Giuliani. Giuliani in the prior months had engaged in a concerted effort to persuade Ukraine to carry out the investigations. Testimony before House committees showed that Giuliani helped engineer Trump’s removal last May of the U.S. ambassador to Ukraine, who was perceived as a roadblock to those investigations. Impeachment is a remedy devised by the United States’ founders, wary of a monarch on American soil after breaking away from Britain and King George III in the 18th century, to enable Congress to remove a president who has committed “high crimes and misdemeanors.” Only two previous presidents have been impeached. The House in 1998 impeached President Bill Clinton on charges of perjury and obstruction of justice arising from a sexual relationship he had with a White House intern, but the Senate acquitted him. The House impeached President Andrew Johnson in 1868, focused on his removal of the secretary of war, but he was acquitted by one vote in the Senate. In 1974, President Richard Nixon resigned after the House Judiciary Committee approved articles of impeachment in the Watergate corruption scandal but before the full House could pass them.