Djokovic and Federer to renew rivalry in Dubai 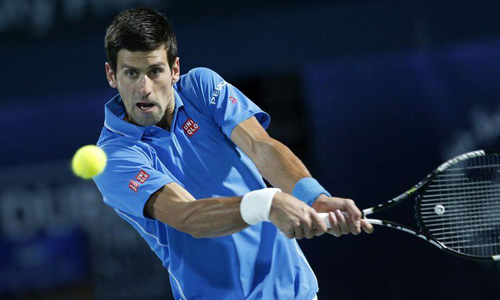 Djokovic and Federer to renew rivalry in Dubai

DUBAI (Reuters) - Novak Djokovic and Roger Federer renew their great rivalry when they meet in the final of the Dubai Championships on Saturday with both players fighting fit and ready for battle. A few months ago they were had been supposed to bring the curtain down on the ATP Tour with a blockbuster at London's O2 Arena, only for Federer to withdraw injured. This time, the world's top-ranked players have arrived in the final in great form and their 37th career meeting has organizers of the $2.5 million hard court event grinning. They have 10 Dubai titles between them and while Federer leads 19-17 in head-to-heads, Djokovic prevailed in the one that really mattered last year to win the Wimbledon title. "When you play Roger, it's always a great challenge," Djokovic, 27, told reporters after beating fourth seed Czech Tomas Berdych 6-0 5-7 6-4 in Friday's semi-final. "If you want to win you have to play your best tennis against Roger in the finals of any event, but here particularly because I feel this is the kind of surface and conditions that suit his game best." Three of their matches have been in Dubai, Federer winning last year's semi-final and a quarter-final against a teenage Djokovic in 2007, while the Serb won their 2011 final clash. "I look forward to it," added Djokovic, who has reasserted his hold over the men's game by winning Wimbledon and the Australian Open in the past seven months and should be favorite to prevail on Saturday. "It's always a tough match. I need to be ready for the battle. I need to stay focused throughout the whole match." DOMINANT DJOKOVIC Father-of-four Federer, who had trounced Croatian teen Borna Coric 6-2 6-1 in the other semi, was full of praise for Djokovic. "Novak has really dominated again since the end of last year," number two seed Federer, a 17-times grand slam champion, told reporters. "He showed up when it mattered the most. That's what you can expect from Novak." Both players enjoyed fairly easy paths to the Dubai final. Federer has yet to drop a set. His highest-ranked opponent was Richard Gasquet in the quarter-finals and the world number 27 retired injured after losing the first set 6-1. Djokovic also strolled through, dropping 13 games in three matches, before Berdych gave him a fright in the last four.