Djokovic and Nadal to renew rivalry in Monte Carlo semis 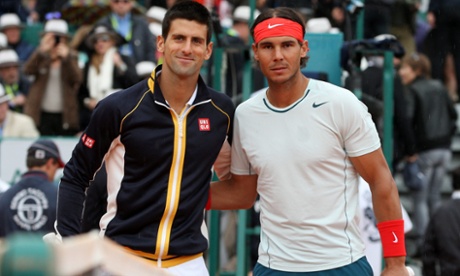 Djokovic and Nadal to renew rivalry in Monte Carlo semis

MONTE CARLO - A near flawless Novak Djokovic crushed Marin Cilic 6-0 6-3 to set up a blockbuster Monte Carlo Masters semi-final with claycourt king Rafa Nadal, who came through a testing workout by David Ferrer on Friday. World number one Djokovic won the first eight games against U.S. Open champion Cilic, whose first mark on the scoreboard was greeted by an ironic celebration from the Croat. There was little else for Cilic to cheer as Djokovic comfortably wrapped up the contest in an hour and five minutes to extend his winning streak to 15 matches after completing an Indian Wells-Miami Masters sweep in March. Djokovic has lost only twice all season and is hoping to become the first player to win the first three Masters titles of the year. Standing in his way in the semi-finals is the familiar face of Nadal, whose form habitually bucks up when the hardcourts give way to Europe's red dust. The world number five and third seed came through against fellow Spaniard Ferrer 6-4 5-7 6-2, eventually suppressing his tireless compatriot after two hours and 44 minutes of typically attritional combat. Saturday's semi-final, a 43rd meeting between Nadal and Djokovic, will reignite one of the fiercest rivalries in the history of tennis and the winner will be an overwhelming favourite to take the title. On the other side of the draw, Frenchman Gael Monfils beat Bulgaria's Grigor Dimitrov 6-1 6-3 to set up a clash with Czech Tomas Berdych, whose match with Milos Raonic ended when the Canadian retired with a foot injury trailing 5-2 in the first set. Djokovic, the 2013 Monte Carlo champion, and Nadal, winner from 2005-2012, are familiar foes with the Spaniard holding a 23-19 lead in the head-to-head battle and an even more emphatic 14-4 advantage on clay, where he remains an indomitable force. "I (have) got to prepare myself mentally for that," Djokovic said. "Other than the mental part, I think physically I'm ready. I'm not exhausted. I haven't spent too much time on the court. Also, I'm feeling the ball really well. "Hopefully, I can perform well. I know that I'm going to need to keep the high level of performance throughout the entire match tomorrow." - Reuters