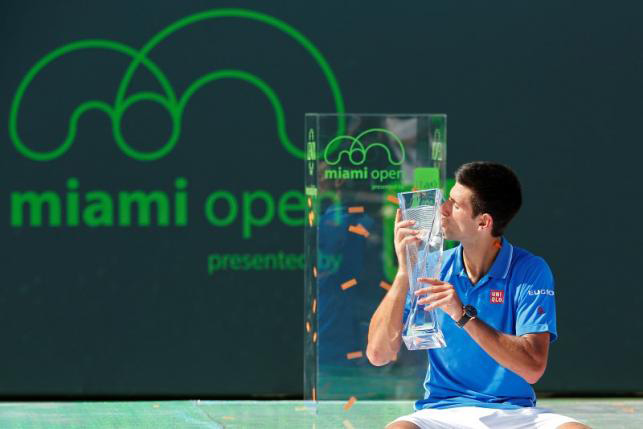 MIAMI - World number one Novak Djokovic continued his impressive run of form, winning the Miami Open over Andy Murray 7-6(3) 4-6 6-0 at Key Biscayne on Sunday. The victory followed Djokovic’s triumphs at the Australian Open and Indian Wells and was the Serb’s fifth title at Miami. He has now beaten Murray in 10 straight matches on hard courts and has an 18-8 overall record against the Scot. The contest, played in the early afternoon heat and bright sunshine, was captivating for two sets but after Djokovic broke in the first game of the final set, he never looked back. "It was brutal. Very warm. I was prepared for a physical battle but it's one thing to prepare and another thing to experience it on court," said Djokovic. "It is not the first time I have had this kind of battle with Andy. As I was expecting, there were very long rallies and I just managed to play the third set as I was supposed to. I am thrilled with this win." Murray started aggressively and broke Djokovic in the third game, but the Serb broke back straight away and then dominated the tie-break. The second set produced some wonderful tennis from both players but turned in Murray's favor when, at 5-4 up, he broke Djokovic to love. Following up on a brilliant return of an overhead shot from Djokovic that took him to break point, Murray sealed the set with a superb cross-court backhand winner. Djokovic lost his cool, picking up a code violation for his yelling at the end of the set that left a nearby ball boy looking shaken. But the Serb quickly turned his anger to his advantage. He broke Murray in the first game of the third set, the Scot twice dragging the ball into the net on the final two points to hand Djokovic an edge he was in no mood to let slip away. The third game of the set was a grueling contest with Djokovic eventually triumphing when he converted his sixth break point and a drained Murray faded badly. After losing to Djokovic in the final in Australia and the semi-final at Indian Wells he was left to contemplate another disappointment. "It is big progress from where I was last year," said Murray. "I am not quite there with Novak yet, but I feel like I am getting a little closer." - REUTERS