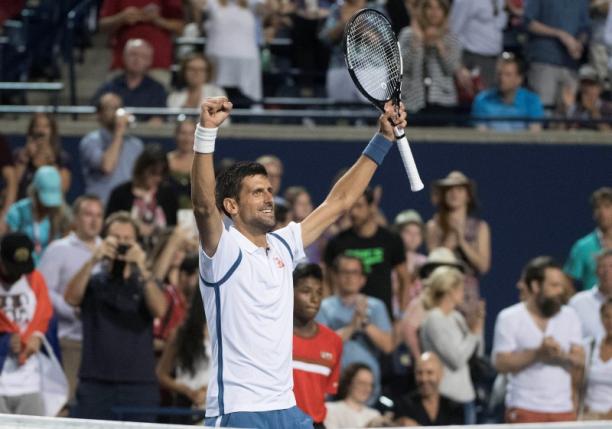 TORONTO - Novak Djokovic maintained his unbeaten record against Frenchman Gael Monfils with a 6-3 6-2 win in the semi-finals of the Rogers Cup in Toronto, while Japan's Kei Nishikori also reached the final after beating Swiss second seed Stan Wawrinka. World number one Djokovic, now 12-0 against Monfils, has the opportunity to become the tournament’s first four-time winner when he meets Nishikori in Sunday's final Nishikori came from 2-5 down in the opening set to stun Wawrinka 7-6(6) 6-1 in the first semi-final at the Aviva Centre. Monfils came into the semi-finals having won nine straight matches, including the Citi Open title in Washington, D.C. last Sunday. Djokovic overcame a service break in the third game and was dialled in the rest of the way in the 74-minute match. The Serb evaluated his play as his best of the week. “It came at the right time,” Djokovic said in a courtside interview. “You never know what is going to come the other way from a guy who has been in top form in the last couple of weeks. “He won in Washington last week and came in here and won comfortably in most of his matches. I had to stay committed from the beginning and I’m very, very pleased with the way I played.” Djokovic is 9-2 against Nishikori and has won their last eight meetings, including the hard-court final in Miami earlier this year. “Playing against Kei is never easy,” Djokovic said. “He’s been around. He’s an established top-five, top-10 player. He’s one of the quickest on tour and I’m going to have some fun.” Nishikori is seeking his first ATP Masters 1000 title after reaching the third final of his career in the elite events. "I knew I would have to step it up a little bit in the second set the first couple of games," Nishikori said after beating Wawrinka for just the second time in five meetings. "And after that, I tried to be more aggressive and really concentrate because he was a little bit down and I knew if I had to let him, he's going to come back.” Wawrinka, a two-times grand slam champion who has won 14 ATP World Tour titles, became increasingly dispirited as he lost 11 of the last 13 games after squandering four set points in that opening set. Nishikori, serving at 40-0, sealed victory on the first of his three match points when an overhead smash prompted an unforced error from his opponent, ending an encounter that lasted just under an hour-and-a-half. -Reuters