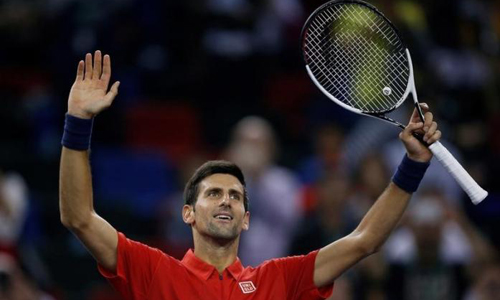 PARIS - Novak Djokovic began his bid to hold on to his number one ranking with an easy win over Gilles Muller in the Paris Masters second round while Andy Murray struggled through and Stan Wawrinka faltered. Serb Djokovic, who could be dethroned from the top spot by Wimbledon champion Murray this week, broke Luxembourger Muller once in each set to secure a drama-free 6-3 6-4 victory. The 29-year-old will hold on to his ranking if he reaches the final in Paris. "I try to focus on playing match after match and putting quality and value into my game. I know that if that's the case, then I can challenge anybody on the world in any surface, in any conditions," Djokovic told a news conference. It went less smoothly for Murray, who overcame a blip to down Spaniard Fernando Verdasco 6-3 6-7(5) 7-5 before U.S. Open champion Wawrinka was knocked out by German qualifier Jan-Lennard Struff 3-6 6-7(6) 7-6(1). A long season eventually took its toll on the world number three from Switzerland, who started brightly but ran out of gas after being forced into a second-set tiebreak. Struff broke in the seventh game of the third set but Wawrinka broke back to send the match into a decisive tiebreak, which the German easily won. Murray strolled through the opening set but lost his focus in the second, netting a backhand to allow Verdasco to level the match. The Scot, however, recovered quickly, breaking to open a 2-0 lead in the decider, only for his opponent, who relied on his heavy forehand and a sliced backhand, to break back and set up two break points at 5-5. Murray saved both and ended the contest on his first match point in the following game. THIEM EXIT Japan's Kei Nishikori cruised into the third round with a 6-2 7-5 win over Serbian Viktor Troicki as the race for places at the ATP Tour Finals gathered pace. The fifth seed, one of six players to have already qualified for the season-ending finals in London, breezed through the first set and quickly broke in the second. A lapse in concentration by the Japanese, however, allowed world number 28 Troicki to break back but Nishikori broke again to end the contest in straight sets. He will next face either local favourite Jo-Wilfried Tsonga, the 11th seed, or Albert Ramos-Vinolas of Spain. Croatian Marin Cilic set up a third-round clash with Belgium's David Goffin as both battle for one of two remaining spots for the Nov. 13-20 ATP event at the 02. Cilic, ninth in the Race to London, beat compatriot Ivo Karlovic 7-6(7) 6-2 while Goffin, who is 11th with an outside chance of qualifying, beat France's Nicolas Mahut 7-6(5) 6-3. Dominic Thiem's chances of taking part in the London showdown, took a big blow when the Austrian, eighth in the Race, lost 6-2 6-4 to American Jack Sock in the second round. Former world number one Rafa Nadal is seventh in the Race but has ended his season and will not play in the Tour finals. -Reuters