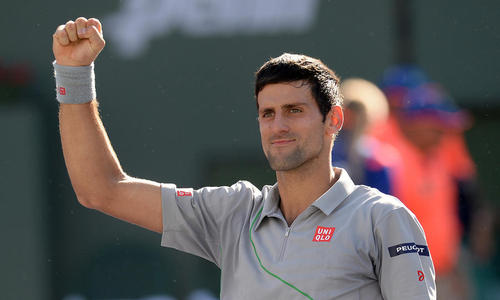 LONDON - World number one Novak Djokovic crushed Britain's Andy Murray 6-2 6-3 on Saturday to set up a mouthwatering final against number two Roger Federer in the BNP Paribas Open. Federer defeated Canada's Milos Raonic 7-5 6-4 to reach his 40th ATP Masters 1000 final and earn a repeat of last year's epic final where he lost to Djokovic in three sets. Djokovic has now won six straight matches against the Scotsman since his defeat in the 2013 Wimbledon final and owns a 17-8 record in their career meetings. "It went really well from the beginning," said Djokovic. "I came out with the right intensity and Andy made a lot of unforced errors. I just played solid and I am happy with the performance," Djokovic said after the one hour, 28 minute match. "I was expecting a battle, it always is with Andy but today I guess he wasn't as close as where he wanted to be on a high quality. I just hung in there and played tactically right." The defending champion broke Murray three times to win the opening set and never looked in danger of needing a third set to secure his place in the final. Djokovic, who has won three times in Indian Wells, looked sharp right from the outset while Murray made just two first serves in six points in his opening service game. Murray made a series of unforced errors, and having fallen a set behind, he struggled to find a way to turn the momentum in his direction. In a tight first set, Federer broke to go 6-5 up when Raonic, who beat Rafa Nadal in Friday's quarter-finals, went long with a backhand. Big serving Raonic produced nine aces but Federer kept firm control in the second set, saving the only break point he faced. "I think I did very well in the first set, scrambled down a few balls and then I did well to get the early break in the second set," said Federer. "After losing 7-6 to him (Djokovic) in the third last year, I couldn't wait to face him on centre court again." Federer, who is on a 19-set unbeaten run, has won Indian Wells on four occasions. - REUTERS